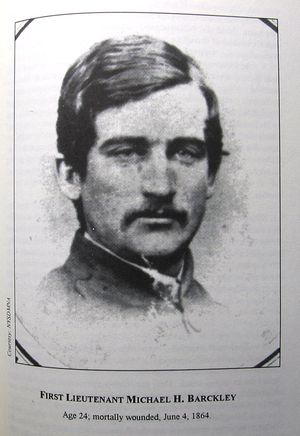 from Carnival of Blood

Michael Barckley was born November 15, 1840 in Knox[1], Albany County, N.Y, the son of Henry Barckley and his wife Magdalene Livingston.[2] He had a younger brother Edward Barckley.[3] His paternal family, which had German origins, had settled in Guilderland several generations previously.[3]

Michael was always a serious student who had a great love of books.[2] He attended the local public schools in Knox.[3] Michael entered Union College[1] in 1861, graduating with honors in July 1862.[2][4]

Michael was working as a clerk at the time of his enlistment.[1]

Michael did not marry.[3]

Michael was raised on a farm in Knox, where his father Henry worked as a farmer and merchant.[3][5] His father was active in local affairs holding the various positions including that of postmaster.[3][6] As a result, Michael grew up in a well to do family that allowed him time for studies, but also stressed the importance of civic responsibility. He attended the Reformed Dutch Church in Knox.[2] He was admired and respected by all who knew him and his loss to the community brought a sadness to all.

His records can also be found under Michael J. Barckley and Michael H. Barclay.

Michael was well thought by his neighbors in Knox so that when he decided to serve in the Civil War, 21 other men from the area joined him.[1] As a result of his college degree and these enlistments, he was commissioned First Lieutenant of Company K.[1] The Reverend E. E. Taylor of Knox on behalf of the people of Knox presented Michael with a sword, sash, belt and pistol.[2] 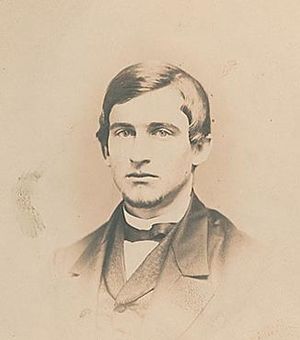 Michael Henry Barckley - Union officer (1840–1864) who served with the 113th New York Volunteers. He was wounded at Cold Harbor on June 5, 1865, and died the next day during amputation of his leg. Image from RR Auction. Added by: Larry Chenault

Lieutenant Michael Barckley died a of shell wound to his right knee received 4 June 1864 at Cold Harbor.[1] He died on 6 July 1864, with his mother Magdalene at his side as a result of amputation at the hospital in Washington DC.[2] His funeral services were held in Knox at the Reformed Dutch Church on Sunday July 10, 1864 with Reverends William P. Davis and E. Vedder officiating.[2]

"Originally enrolled as the 113th New York Infantry Regiment when mustered into service on August 18, 1862, the unit was converted into the Seventh New York Heavy Artillery in December, 1862. An additional two companies were added, bringing the Seventh Heavy to twelve companies."[1][1] His remains were buried at the Knox Reformed Cemetery.[1] 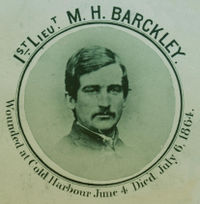 The Knox Historical Society has many historical documents related to Barckley at the Saddlemire Homestead in Knox, including original letters and military papers. Many are difficult to read, and transcriptions are open to discussion.

Michael Henry Barckley's sword is on display at the Saddlemire Homestead in the center of Knox beside the Fire House and in front of the Knox Town Hall. Thanks to Allan Dietz for reminding us.

Huested, Alfred B. War record of famous Albany Regiment of 1862 : History that was read by Dr. A. B. Huested at the reunion of 100 survivors on the occasion of the celebration of the fiftieth anniversary of the old 113th Regiment, later known as the Seventh Heavy Artillery. 1912. from http://dmna.state.ny.us/

Barckley is mentioned in Diaries of George H. Warner

The following excerpt is from Carnival of Blood, by Richard Keating:

In the rural hamlet of Knox, in farm country ten miles west of Albany, young Michael Barckley gained a commission as first lieutenant in Company K, primarily because he was a recent college graduate, but he had also managed to convince twenty-one men from the small community to enlist in the Regiment. His recruiting efforts were then a cause for admiration and celebration, during the patriotic euphoria which gripped the Northern States in the summer of 1862. Three years later, Barckley and sixteen of the twenty-one were dead, and the mood would be far different."

Another popular officer was struck down that day. Nearly two years earlier, when he had been mustered in as a First Lieutenant in Company K, Michael Henry Barkley had been presented with a sword and sash, and a belt and pistol, given to him by the citizens of his small home town of Knox, in rural Albany County. At the ceremony , he had been reminded that the Bible "cursed [him] who keepeth back his sword from blood." And then they had sent him off to war, with a prayer that invoked God, not only to protect him, but also to grant him an honorable death and a heavenly salvation: " May God sustain you in your trials, give you a valiant heart, shield you from evil, and return you and your comrades to us again in peace. If it may be, or if it must be, that you fall, be yours an honored grave,...by and by to enjoy the bliss of heaven."

In accepting the gifts, the Union College graduate promised "...to hold them sacred, to use them where duty calls, and never return them dishonored." Keeping his word, his sword had been blooded during the assault, and on that Sunday morning, when a Rebel shell fragment ripped through his right leg just above his knee, his trial was indeed about to lead to an honored grave. In an effort to save his life, his leg was amputated above the knee that same day. Three days later, while waiting to be put aboard a hospital transport, he wrote to his father, explaining the situation, and urging him not to worry: "Do not be alarmed, as I am getting along first rate." But Barckley was destined to die in a Washington hospital on the evening of July 6. Just before his death, he remarked to his mother, "I could not die in a better cause."

At his funeral in the Knox Dutch Reformed Church four days later, his sword lay amongst flowers strewn upon his flag-bedecked coffin. His pastor described the ceremony: "Citizens from every direction flocked to the house in mourning until the church was filled to its unmost capacity, the vestibule crowded, and the grounds in front filled by a multitude from far and near.... After the ceremony, the assembly followed his remains, in slow and solemn procession, to the new cemetery and on a most beautiful spot, overlooking the place that gave him birth,.... was deposited the lifeless form of the once loved and noble youth...."

"Michael, born in Knox in 1840, educated in the public schools, and grew to manhood on his father's farm; when the civil war broke out he was active in raising a company and went to the front as lieutenant of Company K, Seventh New York Heavy Artillery; at the battle of Cold Harbor he was wounded by a bursting shell, taken to a military hospital at Washington, D.C. where he died from the effects of his wound, 1864; he was unmarried his memory is preserved in Altamont where Michael Barckley Post, Grand Army of the Republic, is named in his honor." 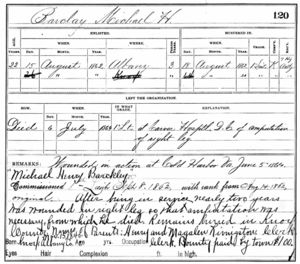 (Note the misspelling of his name in this official report.)

Knox: Michael H. Barckley, born in the town of Knox, graduated at Union College, raised a company in his town, was wounded at Cold Harbor and died July 6, 1864.

Of the hundreds of articles, this is the one that describes the battle in which Barckley was wounded.

The article below appeared in the Altamont Enterprise on July 21, 2011. It tells the life history of Lt. Barckley. For the text version, click here.