From Helderberg Hilltown Biographies
July 6, 1864 - Record of Death and Interment
Jump to navigation Jump to search 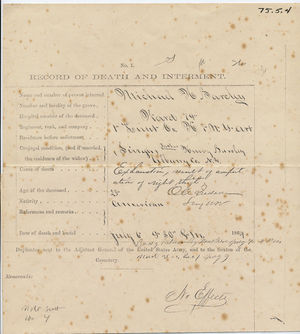 RECORD OF DEATH AND INTERMENT

Number and locality of grave

Hospital number of the deceased. Ward 79"

Cause of death. Exhaustion, result of amputation of right thigh.

Duplicates sent to the Adjutant General of the United States Army, and to the Sexton of the Cemetery. (more unreadable text) July 9