From Helderberg Hilltown Biographies
March 24, 1863 - Letter from Michael Henry Barckley to his Father
Jump to navigation Jump to search 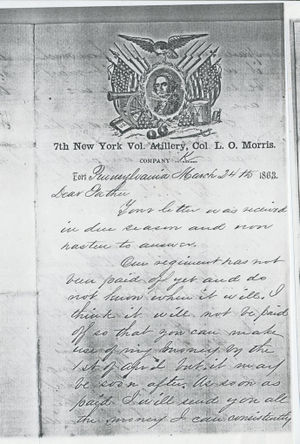 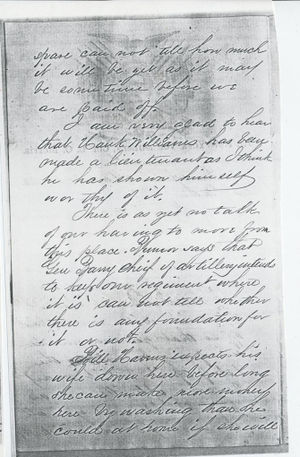 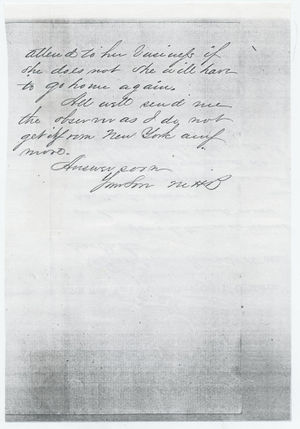 Your letter was received in due season and now hasten to answer.

Our regiment has not been paid off yet and do not know when it will. I think I will not be paid off so that you can make use of my money by the 1st of April but it may be soon after. As soon as paid I will send you all the money I can consistently spare can not tell how much it will be yet as it may be some time before we are paid off.

I am very glad to that Hank Williams has been made a lieutenant as I think he has shown himself worthy of it.

There is as yet no talk of our having to move from this place. Rumor says that Gen Barry Chief of artillery intends to keep one regiment where it is can not tell whether there is any foundation for it or not.

Bill Havens expects his wife down here before long. She can make more money here by washing than she could at home if she will attend to her business. If she does not she will have to go home again.

All well send me the observer as I do not get it from New York any more.

Note: Letter from Michael Henry Barckley to his father

People and Places Mentioned in the March 24, 1863 Letter

Fort Pennsylvania: Description: Located in Tennallytown, DC., northwest of the city, between Forts Kearney and Bayard, Fort Pennsylvania changed its name to Fort Reno on April 1, 1863. This fort served to defend against an approach between the Potomac River and Rock Creek.

Fort Reno was originally named Fort Pennsylvania, and was built during the winter of 1861 shortly after the disastrous defeat of the Union Army at the First Battle of Manassas. In charge of construction of the defenses around Washington was Brig. Gen. John G. Barnard, Col. of Engineers, U.S. Army. Barnard chose the location of Fort Reno for its strategic importance in guarding the Rockville Pike (present day Wisconsin Avenue). Being the highest elevation in the city (429 feet above sea level), Fort Reno also served as a forward outpost and signal station for detecting enemy movement near the northern part of the city.

Originally rather small, Fort Reno was constructed by the 119th Pennsylvania Regiment, enlarged and strengthened with an advanced battery 300 yards north from the highest ridge across what is now Fessenden Street and along 39th Street. This advanced battery had eight 12-pounder guns and a magazine; a covered walkway connected it to the main fort to the south. A double line of rifle trenches was added to strengthen the position.

Eventually the fort was the largest and strongest of those defending the capital with a dozen heavy guns -- three Parrott siege guns and nine 27-pounder barbette guns. A strength of three thousand men of the First Brigade made Fort Reno the stronghold of the northern defenses of the capital.

On August 20, 1861, he was made brigadier general of volunteers. After Maj. Gen. George B. McClellan appointed Barry his chief of artillery, Barry organized the ordnance arm of the Army of the Potomac. In the Peninsula Campaign, Barry supervised and fought at the Sieges of Yorktown, Mechanicsville, Gaines' Mill, White Oak Swamp and Malvern Hill. After action at Harrison's Landing, however, he asked to be relieved, in order to serve elsewhere. Until March of 1864, he supervised the forts and batteries surrounding Washington, D.C., and served on several ordnance boards.