From Helderberg Hilltown Biographies
May 3, 1963 - Letter from William J. Smith to Edward
Jump to navigation Jump to search 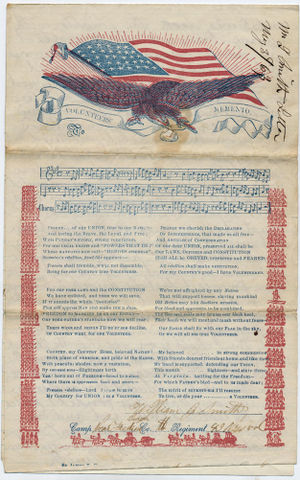 Letter from William J. Smith of Knox to his friend,

Letter describes fighting at Fredericksburg in 1863

Camp Near Fredricksburgh Va May 3 63

Friend Edward I resieved your letter and was glad to hear from you and that you was well my helth is good. It is very hot wether hear hotter then it is in July in Knox i think you had good luck I think with your lambs but I don't think that you got mutch better buck on them my old buck was not due I think tha can draw as mutch I wish that I had them hear I hitch chain to them Fredrick burgh heights and draw them and the rebels down in to the rapihanock river Don't you think I could Dident I tell you we that fix Stone wall Jackson when I got down hear he gon in besids having won arm off but tha give ous sum you better believe tha maid our men scamped after while but our men took the hights but I suspose that tha dident want to keep them but tha could jest as well as not if tha had obaid orders as bother the Major Gineral Sedgwick

he was ordered to take the hights and to hold them at all hasards and to hold them and he took them but went on after the enemy enstid of stopping and fortifing him self this was Sunday that he took them and Monday morning about 7 o clock we could see the rebels coming in our mens rear and we had now men to stop them nothing but our seag peases and tha plaid prety smart on the rebels but could not keep them out it was fun if thair is any fun in shuting rebels to see the rebels squat when won of our seag shells burst amoungst them I was on the hill this side of the river and had fair chanse to see the hole operation of the hole battle on our left the hill was jest bove the the Falmont Depo your father knowes whair the hill is you wantid me to tell all about the battle I cant thai? cant any won tell how a battle loock nor seams It is bludy byssenys any how and aint like farming nor tending store my ridgment and the C main

People and Places Mentioned in the May 3, 1863 Letter

William J. Smith, who wrote the letter, was born in Duanesburgh, NY and enlisted in 1862 at the age of 37

Edward Barckley was the younger brother of Michael Henry Barckley.

Description: On May 1, Gen. Robert E. Lee left Maj. Gen. Jubal A. Early's division to hold Fredericksburg, while marching with the rest of the army to meet Hooker's main offensive thrust at Chancellorsville. On May 3, the Union VI Corps under Sedgwick, reinforced by John Gibbon's II Corps division, having crossed the Rappahannock River, assaulted and carried the Confederate entrenchments on Marye's Heights. The outnumbered Confederates withdrew and regrouped west and southeast of town. Result(s): Union victory

General Sedgwick: The next morning, May 3, 1863 Major General John Sedgwick would continue his efforts to push aside Confederate resistance and move towards Chancellorsville. He would relate their struggles to plow through a tenacious, layered Southern defensive lines.

"The columns moved on the Plank road and to the right of it directly up the heights. The line of battle advanced on the double-quick to the left of the Plank road against the rifle-pits, neither halting nor firing a shot until they had driven the enemy from their lower line of works. In the meantime the storming columns had pressed forward to the crest, and carried the works in the rear of the rifle-pits, capturing the guns and many prisoners. These movements were gallantly executed under a most destructive fire.

Falmont Depot is probably Falmouth Depot, During the American Civil War, Falmouth was occupied by Union forces in 1862 and 1863, and Northern commanders located their headquarters southeast of the town during the Fredericksburg and Chancellorsville campaigns.

General Hancock: In the Battle of Antietam, Hancock assumed command of the 1st Division, II Corps, following the mortal wounding of Maj. Gen. Israel B. Richardson in the horrific fighting at "Bloody Lane." He was promoted to major general of volunteers on November 29, 1862. He led his division in the disastrous attack on Marye's Heights in the Battle of Fredericksburg the following month and was wounded in the abdomen. At the Battle of Chancellorsville, his division covered Maj. Gen. Joseph Hooker's withdrawal and Hancock was wounded again. His corps commander, Maj. Gen. Darius N. Couch, transferred out of the Army of the Potomac in protest of actions Hooker took in the battle and Hancock assumed command of II Corps, which he would lead until shortly before the war's end.