From Helderberg Hilltown Biographies
September 28, 1863 - Letter from Michael Barckley to his Father
Jump to navigation Jump to search 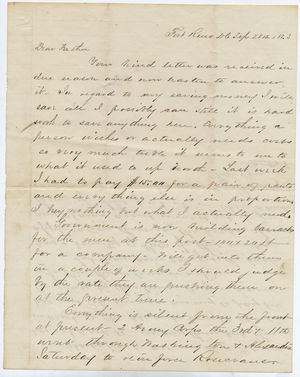 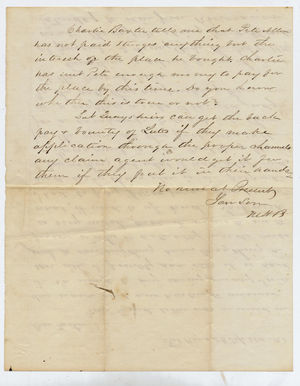 Your kind letter was received in due season and now hasten to answer it. In regard to any saving money I will save all I possibly can still it is hard work to save anything here. Everything a person wishes or actually needs costs so very much treble it seems to me to what it used to up North – Last week I had to pay $15.00 for a pair of pants and every thing else is in proportion. I buy nothing but what I actually need.

Government is now building barracks for the men at this post 1 “ “ and 2 “ ft for a company – will get them in a couple of weeks I should judge by the rate they are pushing them on at the present time.

Everything is silent from the front at present – 2 Army Corps the 3rd and 11th went through Washington + Alexandria Saturday to reinforce Rosecrans.

Charlie Baxter tells me that Pete Allen has not paid Sturges anything but the interest on the place he bought. Charlie has sent Pete enough money to pay for the place by this time. Do you know whether this is true of not?

Lut Quays heirs can get the back pay + bounty of Lutes if they make application through the proper channels any claim agent would get it for them if they put it in their hands.

No news at Present