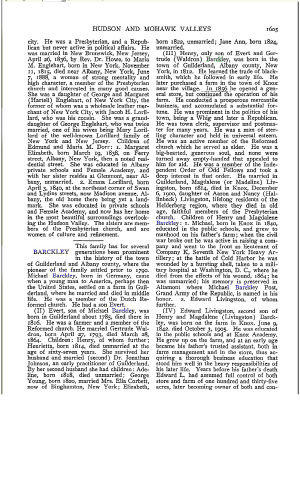 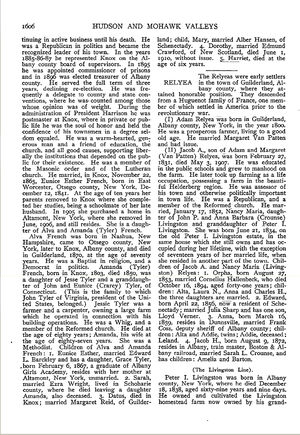 This family has for several generations been prominent in the history of the town of Guilderland and Albany county, where the pioneer of the family settled prior to 1790. Michael Barckley, born in Germany, came when a young man to America, perhaps then the United States, settled on a farm in Guilderland, where he married and died in middle life. He was a member of the Dutch Reformed church. He had a son Evert.

(H) Evert, son of Michael Barckley, was born in Guilderland about 1785, died there in 1816. He was a farmer and a member of the Reformed church. He married Gertrude Waldron, born April 27, 1793, died March 28, 1864. Children: Henry, of whom further; Henrietta, torn 1814, died unmarried at the age of sixty-seven years. She survived her husband and married (second) Dr. Jonathan Johnson, an early practitioner of Guilderland. By her second husband she had children : Adeline, born 1818, died unmarried ; George Young, born 1820, married Mrs. Ella Corbett, now of Binghamton, New York; Elizabeth, born 1822, unmarried; Jane Ann, born 1824, unmarried.

(HI) Henry, only son of Evert and Gertrude (Waldron) Barckley. was born in the town of Guilderland, Albany county. New York, in 1812. He learned the trade of black-smith, which he followed in early life. He later purchased a farm in the town of Knox near the village. In 1856 he opened a general store, but continued the operation of his farm. He conducted a prosperous mercantile business, and accumulated a substantial fortune. Lie was prominent in the politics of his town, being a Whig and later a Republican. Lie was town clerk, supervisor and postmaster for many years. He was a man of sterling character and held in universal esteem. He was an active member of the Reformed church which he served as elder. He was a big-hearted, generous soul, and none were turned away empty-handed that appealed to him for aid. He was a member of the Independent Order of Odd Fellows and took a deep interest in that order. He married in Guilderland, Magdalene (or Madeline) Livingston, born 1814, died in Knox, December 6, 1900, daughter of Aaron and Nancy (Hallinbeck) Livingston, lifelong residents of the Helderberg region, where they died in old age, faithful members of the Presbyterian church. Children of Henry and Magdalene Barckley: i. Michael, born in Knox in 1840, educated in the public schools, and grew to manhood on his father's farm ; when the civil war broke out he was active in raising a company and went to the front as lieutenant of Company K. Seventh New York Heavy Artillery: at the battle of Cold Harbor he was wounded by a bursting shell, taken to a military hospital at Washington, D. C, where he died from the effects of his wound, 1864; he was unmarried ; his memory is preserved in Altamont where Michael Barckley Post, Grand .Army of the Republic, is named in his honor. 2. Edward Livingston, of whom further.

(IV) Edward Livingston, second son of Henry and Magdalene (Livingston) Barckley, was born on the farm in Knox, June 9, 1842. died October 3, 1905. He was educated in the public schools and at Knox Academy. He grew up on the farm, and at an early age became his father's trusted assistant, both in farm management and in the store, thus acquiring a thorough business education that stood him well in the heavy responsibilities of his later life. Years before his father's death

Edward L. had assumed full control of both store and farm of one hundred and thirty-five acres, later becoming owner of both and continuing in active business until his death. He was a Republican in politics and became the recognized leader of his town. In the years 1885-86-87 he represented Knox on the Albany county board of supervisors. In 1895 he was appointed commissioner of prisons and in 1896 was elected treasurer of Albany county. He served the full term of three years, declining re-election. He was frequently a delegate to county and state conventions, where he was counted among those whose opinion was of weight. During the administration of President Harrison he was postmaster at Knox, where in private or public life he was the soul of honor and held the confidence of his townsmen in a degree seldom equaled. He was a warm-hearted, generous man and a friend of education, the church, and all good causes, supporting liberally the institutions that depended on the public for their existence. He was a member of the Masonic order and of the Lutheran church. He married, in Knox, November 22, 1865, Eunice Esther French, born in East Worcester, Otsego county, New York, December 12, 1 841. At the age of ten years her parents removed to Knox where she completed her studies, being a schoolmate of her late husband. In 1905 she purchased a home in Altamont, New York, where she removed in June, 1906, and still resides. She is a daughter of Alva and Amanda (Tyler) French.

Alva French was born in Nashua, New Hampshire, came to Otsego county. New York, later to Knox, Albany county, and died in Guilderland, 1870, at the age of seventy years. He was a Baptist in religion, and a Democrat in politics. .Amanda (Tyler) French, born in Knox, 1803, died 1850, was a daughter of Jesse Tyler and a granddaughter of John and Eunice (Crarey) Tyler, of Connecticut. (This is the family to which John Tyler of Virginia, president of the United States, belonged.) Jessie Tyler was a farmer and a carpenter, owning a large farm which he operated in connection with his building operations. He was a Whig, and a member of the Reformed church. He died at the age of eighty years ; Amanda, his wife at the age of eighty-seven years. She was a Methodist. Children of Alva and Amanda French: i. Eunice Esther, married Edward L. Barckley and has a daughter,