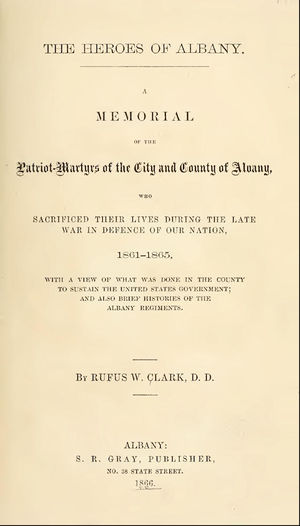 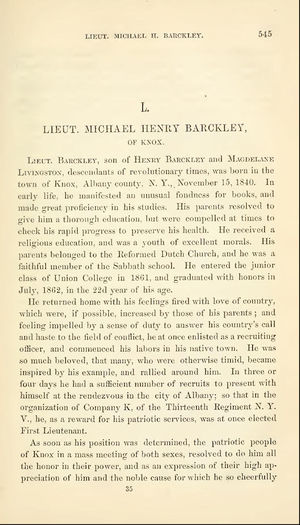 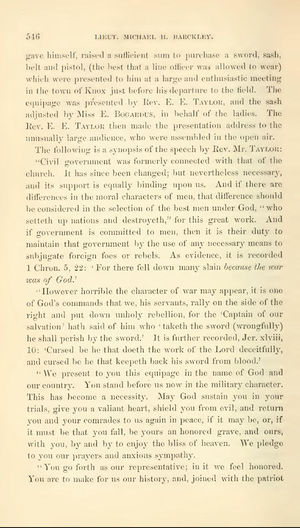 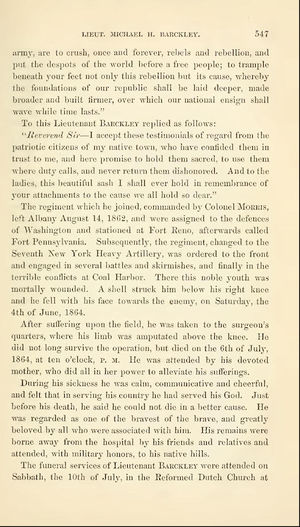 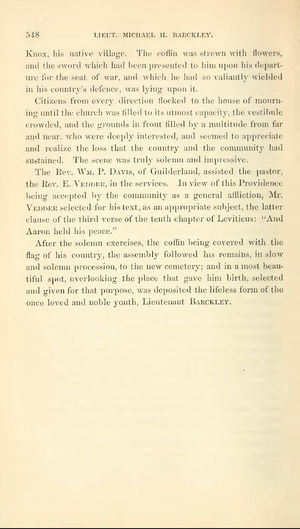 Lieut. Barckley, son of Henry Barckley and Magdelane Livingston, descendants of revolutionary times, was born in the town of Knox, Albany county, N. Y.,. November 15, 1840. In early life, he manifested an unusual fondness for books, and made great proficiency in his studies. His parents resolved to give him a thorough education, but were compelled at times to check his rapid progress to preserve his health. He received a religious education, and was a youth of excellent morals. His parents belonged to the Reformed Dutch Church, and he was a faithful member of the Sabbath school. He entered the junior class of Union College in 1861, and graduated with honors in July, 1862, in the 22d year of his age.

He returned home with his feelings fired with love of country, which were, if possible, increased by those of his parents; and feeling impelled by a sense of duty to answer his country's call and haste to the field of conflict, he at once enlisted as a recruiting officer, and commenced his labors in his native town. He was so much beloved, that many, who were otherwise timid, became inspired by his example, and rallied around him. In three or four days he had a sufficient number of recruits to present with himself at the rendezvous in the city of Albany; so that in the organization of Company K, of the Thirteenth Regiment N. Y. V., he, as a reward for his patriotic services, was at once elected First Lieutenant.

As soon as his position was determined, the patriotic people of Knox in a mass meeting of both sexes, resolved to do him all the honor in their power, and as an expression of their high appreciation of him and the noble cause for which he so cheerfully

gave himself, raised a sufficient sum to purchase a sword, sash, belt and pistol, (the best that a line officer was allowed to wear) which were presented to him at a large and enthusiastic meeting in the town of Knox just before his departure to the field. The equipage was presented by Rev. E. E. Taylor, and the sash adjusted by Miss E. BOGARDUS, in behalf of the ladies. The Rev. E. E. Taylor then made the presentation address to the unusually large audience, who were assembled in the open air.

The following is a synopsis of the speech by Rev. Mr. Taylor:

"Civil government was formerly connected with that of the church. It has since been changed; but nevertheless necessary, and its support is equally binding upon us. And if there are differences in the moral characters of men, that difference should be considered in the selection of the best men under God, "who setteth up nations and destroyeth," for this great work. And if government is committed to men, then it is their duty to maintain that government by the use of any necessary means to subjugate foreign foes or rebels. As evidence, it is recorded 1 Chron. 5, 22: ' For there fell down many slain because the war was of God.'

"However horrible the character of war may appear, it is one of God's commands that we, his servants, rally on the side of the right and put down unholy rebellion, for the 'Captain of our salvation' hath said of him who 'taketh the sword (wrongfully) he shall perish by the sword.' It is further recorded, Jer. xlviii, 10: 'Cursed be he that doeth the work of the Lord deceitfully, and cursed be he that keepeth back his sword from blood.'

"We present to you this equipage in the name of God and our country. You stand before us now in the military character. This has become a necessity. May God sustain you in your trials, give you a valiant heart, shield you from evil, and return you and your comrades to us again in peace, if it may be, or, if it must be that you fall, be yours an honored grave, and ours, with you, by and by to enjoy the bliss of heaven. We pledge to you our prayers and anxious sympathy.

"You go forth as our representative; in it we feel honored. You are to make for us our history, and, joined with the patriot

army, are to crush, once and forever, rebels and rebellion, and put the despots of the world before a free people; to trample beneath your feet not only this rebellion but its cause, whereby the foundations of our republic shall be laid deeper, made broader and built firmer, over which our national ensign shall wave while time lasts."

To this Lieutenant Barckley replied as follows:

"Reverend Sir — I accept these testimonials of regard from the patriotic citizens of my native town, who have confided them in trust to me, and here promise to hold them sacred, to use them where duty calls, and never return them dishonored. And to the ladies, this beautiful sash I shall ever hold in remembrance of your attachments to the cause we all hold so dear."

The regiment which he joined, commanded by Colonel Morris, left Albany August 14, 1862, and were assigned to the defences of Washington and stationed at Fort Reno, afterwards called Fort Pennsylvania. Subsequently, the regiment, changed to the Seventh New York Heavy Artillery, was ordered to the front and engaged in several battles and skirmishes, and finally in the terrible conflicts at Coal Harbor. There this noble youth was mortally wounded. A shell struck him below his right knee and he fell with his face towards the enemy, on Saturday, the 4th of June, 1864.

After suffering upon the field, he was taken to the surgeon's quarters, where his limb was amputated above the knee. He did not long survive the operation, but died on the 6th of July, 1864, at ten o'clock, p. m. He was attended by his devoted mother, who did all in her power to alleviate his sufferings.

During his sickness he was calm, communicative and cheerful, and felt that in serving his country he had served his God. Just before his death, he said he could not die in a better cause. He was regarded as one of the bravest of the brave, and greatly beloved by all who were associated with him. His remains were borne away from the hospital by his friends and relatives and attended, with military honors, to his native hills.

The funeral services of Lieutenant Barckley were attended on Sabbath, the 10th of July, in the Reformed Dutch Church at

Knox, his native village . The coffin was strewn with flowers, and the sword which had been presented to him upon his departure for the seat of war, and which he had so valiantly wielded in his country's defence, was lying upon it.

Citizens from every direction flocked to the house of mourning until the church was filled to its utmost capacity, the vestibule crowded, and the grounds in front tilled by a multitude from far and near, who were deeply interested, and seemed to appreciate and realize the loss that the country and the community had sustained. The scene was truly solemn and impressive.

The Rev. Wm. P. Davis, of Guilderland, assisted the pastor, the Rev. E. Vedder, in the services. In view of this Providence being accepted by the community as a general affliction, Mr. Vedder selected for his text, as an appropriate subject, the latter clause of the third verse of the tenth chapter of Leviticus: "And Aaron held his peace."

After the solemn exercises, the coffin being covered with the flag of his country, the assembly followed his remains, in slow and solemn procession, to the new cemetery; and in a most beautiful spot, overlooking the place that gave him birth, selected and given for that purpose, was deposited the lifeless form of the once loved and noble youth, Lieutenant Barckley.

Clark, Rufus W. The Heroes of Albany. A Memorial of the Patriot-martyrs of the City and County of Albany, Who Sacrificed Their Lives during the Late War in Defense of Our Nation 1861-1865, with a View of What Was Done in the County to Sustain the United States Government; and Also Brief Histories of the Albany Regiments. Albany: S.R. Gray, 1866. Print.