Edward Livingston, second son of Henry Barckley and Magdalene (Livingston) Barckley, was born on the farm in Knox, June 9, 1842 [1]

He was educated in the public schools and at Knox Academy. He grew up on the farm, and at an early age became his father's trusted assistant, both in farm management and in the store, thus acquiring a thorough business education that stood him well in the heavy responsibilities of his later life. Years before his father's death Edward L. had assumed full control of both store and farm of one hundred and thirty-five acres, later becoming owner of both and continuing in active business until his death. In the years 1885-86-87 he represented Knox on the Albany county board of supervisors. In 1895 he was appointed commissioner of prisons and in 1896 was elected treasurer of Albany county. He served the full term of three years, declining re-election. He was frequently a delegate to county and state conventions, where he was counted among those whose opinion was of weight. During the administration of President Harrison he was postmaster at Knox, where in private or public life he was the soul of honor and held the confidence of his townsmen in a degree seldom equaled. He was a warm-hearted, generous man and a friend of education, the church, and all good causes, supporting liberally the institutions that depended on the public for their existence. He was a member of the Masonic order and of the Lutheran church.[1]

He married, in Knox, November 22, 1865, Eunice Esther French, born in East Worcester, Otsego county, New York, December 12, 1841. Eunice was a daughter of Alva French and Amanda Tyler .[1]. They had one daughter: 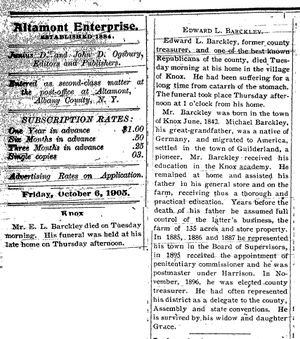 Altamont Enterprise October 6, 1905,
Edward L. Barckley
Edward L. Barckley, former county treasurer and one of the best known Republicans of the county, died Tuesday morning at his home in the village of Knox. He had been suffering for a long time from catarrh of the stomach.
The funeral took place Thursday afternoon at 1 o’clock from his home.
Mr. Barckley was born in the town of Knox June, 1842. Michael Barckley, his great-grandfather, was a native of Germany, and migrated to America, settled in the town of Guilderland, a pioneer. Mr. Barckley received his education in the Knox academy. He remained at home and assisted his father in his general store and on the farm, receiving thus a thorough and practical education. Years before the death of his father he assumed full control of the latter’s business, the farm of 135 acres and store property. In 1885, 1886, and 1887 he represented his town in the Board of Supervisors, in 1895 received the appointment of penitentiary commissioner and he was postmaster under Harrison. In November, 1896, he was elected county treasurer. He had often represented his district as a delegate to the county, Assembly and state conventions. He is survived by his widow and daughter, Grace.

He subsequently settled in the village of Knox and owned a farm joining the village In 1856 he opened a store and engaged in general mercantile business, but still operated his farm; being a man of good judgment and of unusual business ability, he accumulated a large property. In politics he was first a Whig and later identified himself with the Republican party. He was elected town clerk and rep- resented his town on the Board of Supervisors for two terms, and was postmaster for a number of years. He is a member of the Independent Order of Odd Fellows. His wife was Magdalene, daughter of Aaron Livingston of Guilderland, and they had two children, Michael and Edward L. ; the former was lieutenant in Co. K, 7th N Y Heavy Artillery: he was wounded at the battle of Cold Harbor and died from the effects of his wound. Henry Barckley was a member of the Dutch Reformed church in which he was elder, an active worker and a liberal supporter; his wife survives him and lives with her son. Edward L. Barckley received his education in the Knox Academy. He remained at home and assisted his father in the store and on the farm, receiving thus a thorough and practical education. Years before the death of his father he assumed full control of his father's business and now owns the farm of 135 acres and store property. For many years Mr. Barckley has been prominently identified with the Republican party and is a recognized leader of that party in his town. The years of 1885, '86 and '87 he represented his town on the Board of Supervisors, in 1895 received the appointment of penitentiary commissioner and was postmaster under Harrison. In November, 1896, his party honored him with the election of treasurer of Albany county. He has often represented his dis- trict as a delegate to the County, Assembly and State Conventions. November 22, 1865, he married Miss Eunice, daughter of Alvah and Amanda (Tyler) French, and they have one child, Grace.