From Helderberg Hilltown Biographies
June 15, 1864 - Letter from Johnson to his brother
Jump to navigation Jump to search 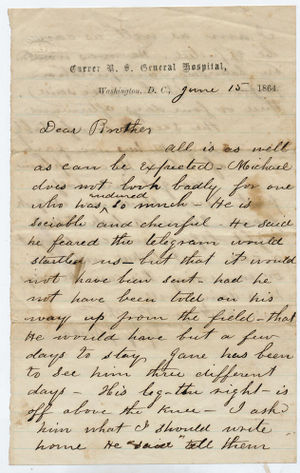 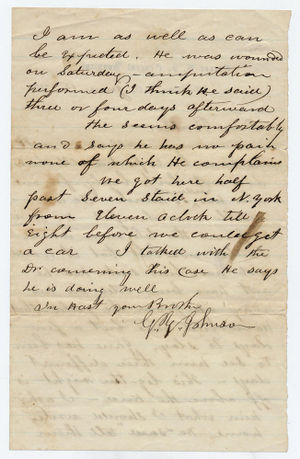 All is as well as can be expected – Michael does not look badly for one who has endured so much – He is sociable and cheerful. He said he feared the telegram would startle us – but that it would not have been sent – had he not have been told on his way up from the field – that he would have but a few days to stay. Jane has been to see him three different days – His leg –the right – is off above the knee – I asked him what I should write home. He said, “tell them I am as well as can be expected.” He was wounded on Saturday – amputation performed (I think he said) three or four days afterward.

He seems comfortably and says he has no pain none of which he complains.

We got here half past seven. Staid in N. York from eleven o clock till eight before we could get a car. I talked with the Dr. concerning his case. He says he is doing well.

In hast (haste?) your Brother

People and Places Mentioned in the June 15, 1864 Letter

Evert, son of Michael Barckley, was born in Guilderland about 1785, died there in 1816. He was a farmer and a member of the Reformed church. He married Gertrude Waldron, born April 27, 1793, died March 28, 1864. Children: Henry, of whom further; Henrietta, born 1814, died unmarried at the age of sixty-seven years. Gertrude survived her husband and married (second) Dr. Jonathan Johnson, an early practitioner of Guilderland. By her second husband she had children : Adeline, born 1818, died unmarried ; George Young, born 1820, married Mrs. Ella Corbett, now of Binghamton, New York; Elizabeth, born 1822, unmarried; Jane Ann, born 1824, unmarried.

This letter is most probably from George Young Johnson to Henry Barckley, George's half-brother and the father of Michael. The Jane mentioned in the letter is probably Jane Ann Johnson, the sister of George and half-sister to Henry.