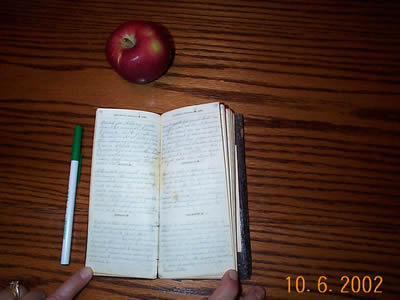 The Civil War diaries of George H. Warner from 1862 and 1863 are posted on the Berne Historical Project site.

Pvt. George H. Warner was born on August 23, 1845, when his father, John Warner was 37, and his mother Catherine West Warner, was 24. They lived in a small brick house across from St. Paul's Lutheran Church in Berne, N.Y.

George was 17 years old when he went off to war with the 177th New York State Volunteers infantry regiment. Private Warner’s regiment experienced only 42 days of actual combat. (May 25 - July 5, 1863) Except for this six-week period under fire battle was with disease, work, drills, boredom, and malnutrition. He died September 28, 1863, at home, from the sickness he had contracted while serving in the Union Army in Louisiana. He was 18 years, one month and five days old.

The following January his younger brother, Peter William Warner, lied about his age and joined the Union Army. Peter died November 1864 in Andersonville Prison at the age of 15 and was buried there at Andersonville, Georgia.

Some of the soldiers mentioned in George’s diary were not from Berne, but from adjoining townships of Knox and Wright. A few were from Schoharie County. These people were all grouped together in one area of conflict.

The bodies of Joel Wilson and Jesse D. Wood, both of whom died from the fever at Port Hudson, Louisiana in August 1863, were brought home to Berne by Captain Morgan L. Filkins for burial.