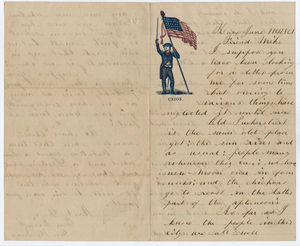 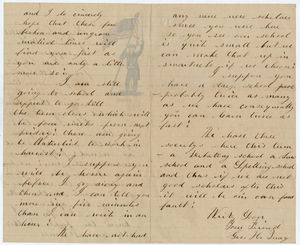 I suppose you have been looking for a letter from me for some time but owing to various things have neglected it until now.

Old Puckerstreet is the same old place yet: the sun rises and a usual: people marry whenever they can: we have a new moon once in four weeks: and the chickens go to roost in the latter part of the afternoon.

As far as I know the people in this city are all well and I do sincerely hope that these few broken and ungrammatical lines will find you just as you are only a little more so:

I am still going to school and expect to go till the town closes which will be four weeks from next Friday: then am going to Wastervliet?? To work in harvest:

I suppose you will be home again before I go away and then and I can tell you more in five minutes than I can write in an hour:

We have not had any more new scholars since you were here so you see our school is quite small but we can make that up in smartness if we choose:

I suppose you have a large school – probably twice as many as we consequently you can learn twice as fast:

We have three societys here this term – a debating school a law school and a Spelling school and thus if we are not good scholars after this it will be our own fault: