From Helderberg Hilltown Biographies
June 25, 1864 - Letter from mother to husband
Jump to navigation Jump to search 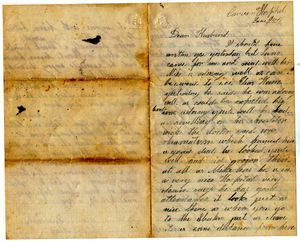 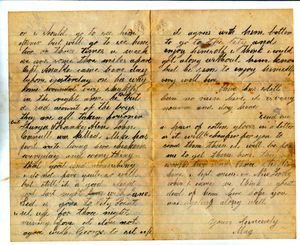 Letter from Magdalene Livingston Barckley to her husband, Henry Barckley

Sent from Carver U. S. General Hospital in Washington, DC, describing Michael Henry Barckley’s condition and her experiences at the hospital

I should have written you yesterday but Jane (Lane?) came for me and went with her. Mike is adoing well as can be. I went to see Elias Hane yesterday. he said he was adoing well as could be expected. his limb was adoing quite well. he had a swelling on his shoulder wich the doctor said was rheumatism which pained him a good deal. he looked quite well had not grown thin at all as Mike has. he is in a very nice hospital very clean. says he has good attendance. it looks just as nice there as when you go to the Shaker just as clean. it is some distance from here or I should go to see him oftener but will go to see him two or three times a week. we are some three miles apart. Capt Anabel came here day before yesterday on his way home wounded very slightly in the right arm. He told but a sad account of the boys. they are all taken prisoners but Sturgess. Hanky Alen, John Cannull was killed. Mike has first rate living here. chicken every day and everything that good and nourishing. I do not fare quite so well, but still it is good. sleept good last night with Jane (Lane?). Sid is gone to City Point. i set up for three nights runing before. it does not agree with George to set up. it agrees with him better to go to the city and enjoy himself. I think I could get along without him know but he seems to enjoy himself very well here.

There has still been no rain here. it is very ??? and dry here

Send me a pair of cotton gloves in a letter as it will be cheaper for you to send them than it will be for me to get them here. They are worth two and three strilling? (sterling?) here. I left mine in New Jersey when I came. we think a great deal of home here. hope you are ageting along well

People and Places Mentioned in the June 25, 1864 Letter

Elias Hanes was in Company K with Barckley. Hanes was born in Knox. He was wounded June 8, 1864 at Cold Harbor and his leg was amputated the same day. He died July 10, 1864 in Washington, DC.

Captain Samuel L. Anable was born in Westerlo and commanded Company K, where Barckley was a First Lieutenant. He was wounded in the shoulder on June 16, 1864.

Charles E. Sturgess was in Company K with Barckley. He was born in Knox and was captured after this letter was written on July 30, 1864.

Henry H. Allen was in Company K with Barckley. He was born in Knox and was killed in action at Petersburg on June 19, 1864, six days before this letter was written.

John H. Cannull was in Company K with Barckley. He was born in Berne and killed at Petersburg on June 16, 1864, nine days before this letter was written.