From Helderberg Hilltown Biographies
July 9, 1863 - Letter from Michael Henry Barckley to his Father
Jump to navigation Jump to search 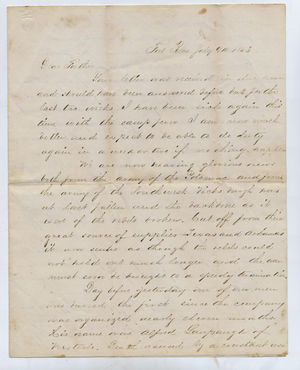 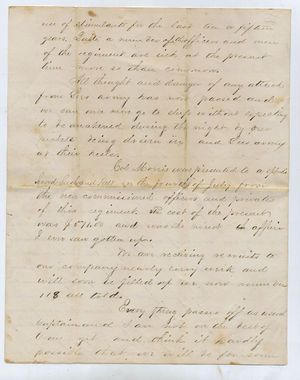 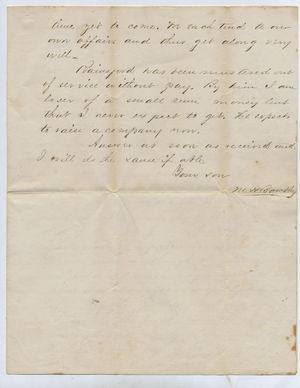 Your letter was received in due season and should have been answered before but for the last two weeks I have been sick again this time with the camp fever. I am now much better and expect to be able to do duty again in a week or two if nothing happens.

We are now hearing glorious news both from the army of the Potomac and from the army of the Southwest. Vicksburgh has at last fallen and the backbone as it were of the rebels broken. Cut off from their great source of supplies. Texas and Arkansas. It now seems? as though the rebels could not hold out much longer and the war must soon be brought to a speedy termination.

Day before yesterday one of our men was buried. The first since the company was organized nearly eleven months. His name was Alfred Laupaugh of Westerlo. Death caused by constant use of stimulants for the last ten or fifteen years. Quite a number of the officers and men of the regiment are sick at the present time, more so than common.

All thought and danger of any attack from Lee’s army has now passed and we can once more go to sleep without expecting to be awakened during the night by our pickets being driven in and Lee’s army on their heels.

Col. Morris was presented to a splendid Sword, Sash, and Belt in the fourth of July from the non commissioned officers and privates of their regiment. The cost of the present was $571.00? and was the nicest affair I ever saw gotten up.

We are receiving recruits to our company nearly every week and will soon be filled up we now number 118 all told.

Everything passes off a usual. Captain and I are not on the best of terms yet and think it hardly possible that we will be for some time yet to come. We each tend to run our own affairs and thus get along very well-

Rainsford has been mustered out of service without pay. By him I am loser of a small sum of money lent that I never expect to get. He expects to raise a company now.

Answer as soon as received and I will do the same if able.