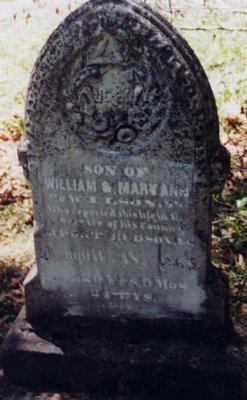 JOEL son of William and Mary Ann Wilson who departed this life in the service of his country at Port Hudson August 18, 1863 Age 20 yrs 9 mos 24 dys

At the time of his enlistment to serve in the Civil War, he was engaged to Ann West.[5]

Joel, who was born in 1842, lived his entire life in Berne except for the time he served in the Civil War. He was recorded in the 1850 US Census in Berne with his parents and his younger sister Martha.[3] His father was a very successful farmer.[9] By the 1860 US Census, his father had remarried and the family had grown with the addition of two younger girls and a baby boy Conger Wilson.[4] When the Civil War began, Joel wanted to enlist in the army to serve his country, however he was discouraged by friends.[1] Finally on October 13, 1862 he enlisted in Company C of the 177th Regiment.[1] The Regiment was sent to Bonnet Carre, La., where they remained until May 7, 1863.[1] Then they started toward Port Hudson during which time Joel fell sick in Baton Rouge.[1] After he had partially recovered, he rejoined the Regiment in Port Hudson, from where he wrote letters to family and friends.[1] On August 8, 1863, he again fell ill and went to the hospital with chills and fever.[1] While in the hospital, the Regiment received orders to return home.[1] Joel joined the Regiment on a transport, but he apparently knew he was too sick to survive the journey as he said "I shall never see home again."[1] On August 18, 1863, he ate breakfast and fell to the ground dead.[1]

Joel died of typhus fever[8], in a hospital at Port Hudson, Baton Rouge, La. His remains were interred, near the hospital, on the 19th of August.[1] They were, however, subsequently taken up and carried home, and, on the 29th of December, he was buried at the West Mountain Methodist Episcopal Cemetery near his father's home where he was born.[1] His grave site is marked by a beautiful carved stone.

JOEL WILSON OF BERN <br.> Joel Wilson, son of William and Mary Ann Wilson, was born in Bern, October 24, 1842. He was a dutiful son, a kind bother, and a youth of excellent moral character. He desired, at the commencement of the war, to enlist in the army, but, like many others whom we have already sketched, was prevented by the entreaties of his friends. At last they yielded to his earnest patriotism, and, October 7, 1862, he joined Company C, One Hundred and Seventy-seventh New York Regiment. An incident occurred, after he joined the army, that made a deep impression upon his mind. One of his associates, with whom he had been intimate from childhood and who enlisted with him, lost both of his eyes by an accident. [This refers to David Gathen ] Joel was deeply moved with sympathy for his friend, and did all in his power to alleviate his sufferings. He manifested toward him the kindness of a tender and affectionate brother, and he became himself more serious, and loved to attend religious meetings. We hope that at that time, he gave his heart to Jesus, and made his peace with God. But of this we cannot speak positively.

Joel was ordered, with his regiment, to Bonnet Carre’, Louisiana, and remained there until the 7th of May, 1863, when they started for Port Hudson. He was left at Baton Rouge, sick, and remained there until the 21st of July. He partially recovered and joined the regiment again at Port Hudson. At that time he wrote a letter to his friends, in which he expressed the fond hope of soon meeting again the loved ones at home. But, on the 8th day of August, he went into the hospital with chills and fever, and worn down with exposures and privations.

Soon, however, his regiment received orders to return home, and went on board a transport. But the order was countermanded, and, as Joel stepped from the boat, he said, with a sad heart, “I shall never see home again.” And so it proved. He was able to walk about, but, on the morning of the 18th of August, just after he had taken his breakfast, he fell and instantly expired.

His remains were interred, near the hospital, on the 19th of August. They were, however, subsequently taken up and carried home, and, on the 29th of December, were deposited in a burial place near his father’s house, where he was born.