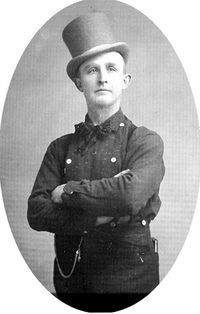 Henry was married to Caroline "Callie" Powers before 1870. They had one child:

Henry was a farmer before the Civil War.[1]After the Civil War,Henry moved to the mid-west. He became a photographer in Grafton, ND. While he lived his adult life in the midwest, he often visited the family farm in the Switzkill Valley.

Henry A. Ball and J. O. Rindahl were partners in Ball & Rindahl Studio, Grafton, North Dakota, in 1890; a partner in Ball, Dix & Mead, Ft. Randall, Dakota Territory. The association with Dix and Mead would have been prior to 1890 as the Dakota Territory was divided into the states of North Dakota and South Dakota on November 2, 1889.web site

Henry died on July 3, 1925, in Grafton, N. Dakota.and was buried at the Crescent Cemetery, Grafton, ND