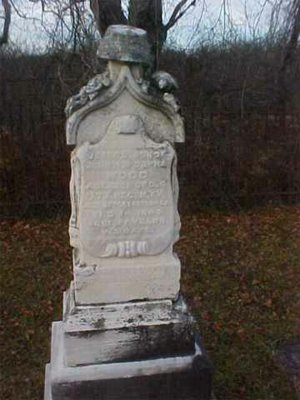 He died of disease while in service at Port Hudson, August 13, 1863.[6] His remains were brought home and buried in Berne[1] in the Wood Family Burying Ground. 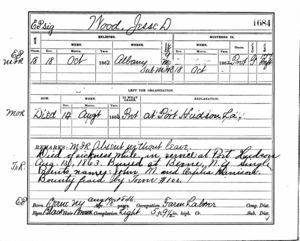 Died of sickness while in service at Port Hudson on Aug 13, 1863. Remains brought home by Capt. Morgan L. Filkins. Buried at Berne

My name is Jesse Wood; I am 17. I died in the Civil War on Aug. 14, 1863, three days after my birthday. I did not want to go to war. I was not drafted. At 16 I volunteered because it seemed necessary for me to help keep our country, not yet 100 years old, whole and free, for you.

I saw death, disease, and starvation before I died at Port Hudson, La. A family friend, Morgan Filkins, an officer, brought my body home to Berne. My mother, sister, and brothers gently buried me in the tiny family plot on our farm. They tended my grave, planted roses, and every year since then the veterans come and bring me a bright new flag. For 120 years I have rested here quietly in the place I love best on earth. A week ago you came and violated my grave.

Why did you push over my small monument and the others of my family? I do not understand. Destruction is not fun. War, the ultimate destruction, is horrible. I know. Didn't you see my flag, even if it was too dark to read my name?

You do not know me at all. I know you but I bear you no hate. Rather, I pity you. Already you have begun to lose the joy of laughter, the beauty of mountain and flowers, the dignity of life and death. Please cherish our resting places. You will grow old and all too soon you will join me in eternity. Then you will understand how I feel now. I am 17.

(I wrote the above after seeing the vandalism at the Wood Cemetery just outside Berne. Somehow I felt I must speak for the boy who gave his life for all of us — Euretha Stapleton, historian, Town of Berne.)