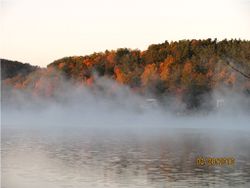 Early morning mist on Warner's Lake in early October, from the collection of Willard Osterhout

This is a series of images showing the beauty of the Hilltowns. When we get enough images we will make a separate page for each town. Maybe some day we will have enough to make a coffee table book!

Warm thanks to those willing to upload and share their photos: 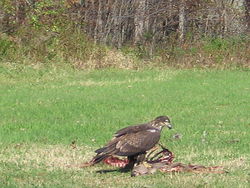 Bald Eagles From Al Deitz: "Three days straight in October of 2009, I passed the field on the east side of Switzkill Road near the Foxenkill Bridge and saw this immature Bald Eagle feeding on a deer carcus. On the third day I had my camera, and when I took this photo from my car, I could hear the eagle tear the meat from the bones . When I left the car for a closer photo, this spooked eagle would fly up into a tree to join it's mate. I suspect these two lived on West Mt."

35 Acres given to Huyck Preserve 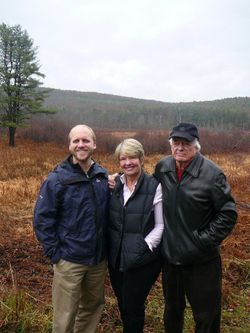 Located just along Route 85 just north of Rensselaerville, this large open wetland is easily viewed and can be enjoyed by all. This land has terrific birding potential and is on the edge of being suitable habitat for the endangered bog turtle. Along with being protected in perpetuity, this wonderful gift will be highly valued at the biological field station for research and education opportunities.

Eric lives in Township next to the Township Tavern. His house is on the site of the Octagon House. Eric has many photos posted on our "Then and Now" page.

Daniel A. Driscoll, of Knox, is founder and Chairman of the Helderberg Escarpment Planning Committee; he is a member of the Town of Knox Planning Board. Like all of the Albany hill towns, Knox is known for its natural beauty: pastoral rural countryside, rolling hills, meandering creeks, waterfalls, forest land. Click her for a list of Knox Farms, Natural History, and Outdoor Recreation opportunities. Here are some of Dan's pictures showing the Beauty of Knox

Barb lives in Rensselaerville and is the founder of Rensselaerville Farmland Protection Facebook group. These are some of the beautiful photos posted by by her on the site.

Worked at the Huyck Preserve in Rensselaerville.

Here is another of her photos taken at Dunbar Hollow

Jeremy Rue lives in Knox. All images were taken about 2003.

Here is a link to more of Jeremy's images.

Photos of Berne by Charles Sloger.

Here are more of Charles' photos

Born in Berne and gets back there annually to visit friends and family.

Willard Osterhout is not only a great photographer, but also a collector of old photos and vintage postcards of the Hilltowns. He has posted hundreds of old photographs of Berne on this site, and is is now doing the same for Rensseaerville.

If anyone knows who took these photos, let us know so we can give them credit

If you enjoyed these pictures, you will probably also enjoy looking at the pictures on the Then and Now page.