From Berne, NY - a Helderberg Hilltown
Foxenkill
Jump to navigation Jump to search 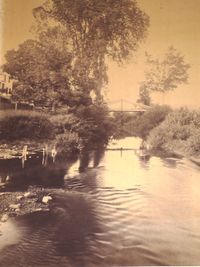 King post truss bridge[1] on the old road from the hamlet of Berne to Knox. This crossed near the Yarmchuk house which can be seen on the left<br.>Photo courtesy of Joan Yarmchuk Rorick

Fox Creek. The Fox Creek flows for approximately 11.7 miles in the Town of Berne. Its headwaters lie at the junction of Smokey Hollow Road and county Road 14. Historically the Fox Creek was of commercial importance in that it supported two mills. Lobdell’s Grist Mill was located in East Berne (Historic Site 15), while Carding and Fulling Mills (Historic Site 5) were located in Berne. The Fox Creek is subject to flooding along its entire course throughout the town of Bern

Fox Creek, also called Foxenkill, originates in the highlands in the east end of the Town of Berne. It flows west through East Berne, then the hamlet of Berne where the Berne Falls tumbles down over rock out-crops, then flows placidly onward to West Berne and finally empties into Schoharie Creek.

A short distance west of the Berne hamlet it is joined from the south by the Switzkill.

Here is a map of the Foxenkill / Fox Creek

Visitor facilities in the vicinity:

- Human sewage pollution from houses in the hamlets of East Berne and West Berne and elsewhere along the creek is a major pollution problem. Houses and businesses in the hamlet of Berne will soon be connected to a new sewage system in the hamlet that will be constructed in the next few years.
- Non-point pollution control, especially agricultural runoff due to fertilizers and to cattle.

- The hamlet of Berne turns its back on Fox Creek, which if treated right, would be a valuable resource for the hamlet. Perhaps the land on the south side of the Foxenkill between Fox Creek Park and Berne Town Park could be bought. The land has not much value to its present absentee owner because of it's inaccessibility from the main Yarmchuk farm which is on the opposite bank. On the other hand, it is very accessible from the hamlet side, especially the school, and would be a valuable addition to Fox Creek Park. If the land can not be bought cheaply, perhaps a right-of-way for a trail could be purchased or would be given to the town. The trail could be used by the school's cross country team, by kids going to school from the eastern part of the hamlet, and by hikers and photographers taken with the serene beauty of the Foxenkill.
- Develop a Fox Creek Trail along the banks of the creek.