Eunice Gibbs was born in December 1, 1919, the daughter of Harry Gibbs and Vertie Clow, Star Route, Altamont. Her siblings were:

Eunice Gibbs served in the WAVES in World War II.

A farewell party was given Saturday night at the Knox church hall in honor of Eunice Gibbs, who has enlisted in the WAVES.

The the supper table several patriotic songs were sung, the words having been changed to those more fitting for the occasion. Rev. Norman E. VanderHart acted as toastmaster. Eunice was presented with a Parker fountain pen and pencil set, leather writing portfolio, and a sum of money. The 75 guests present wrote story pictures, from old magazines, of the life of Yoeman Gibbs.

Eunice is wished the best of luck by her freinds.

Eunice Gibbs O'Donnell, Ph. M 1-c, who had been on a trip to see her husband, Robert O'Donnell, Ph. M. 1-c, in California, and was at the home of her parents, Mr.and Mrs. Harry Gibbs, returned to Davisvllle, R. I. where she is stationed. 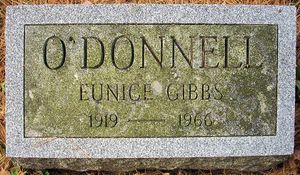 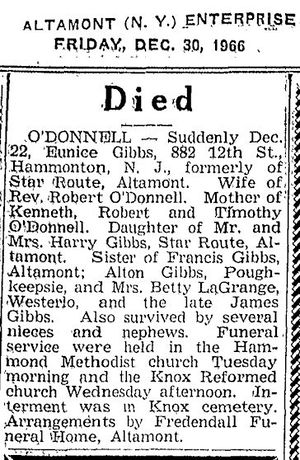