He probably attended school at the red brick school of district #14 on the corner of Switzkill Rd. and Ravine Rd. a stone's through from their house. He could read and write.

Harry Gibbs was was a retired farmer and a member of the Knox Reformed church. Harry grew up on a farm and became a farmer. After marriage, he purchased the Hill and Dale Farm in Pleasant Valley, Town of Knox.

Harry and Vertie loved to travel, and in retirement years from farming, they traveled with Clyde and Alta Ball to many states. They were best friends and relatives. 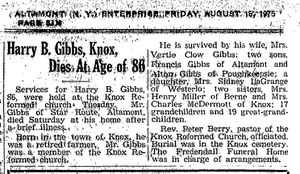 Services for Harry B. Gibbs, 86, were held at the Knox Reformed church Tuesday. Mr. Gibbs of Star Route, Altamont, died Saturday (August 9, 1975) at his home after a brief illness.

Born in the town of Knox, he was a retired farmer. Mr. Gibbs was a member of the Knox Reformed church.

Rev. Peter Berry, paster of the Knox Reformed Church, officiated. Burial was in the Knox Cemetery. The Fredendall Funeral Home was in charge of arrangements.

Brian Gibbs, son of Marion Gibbs of Knox and the late Francis Gibbs, was one of five $100 prize winners at the Rensselaer County Council for the Arts's seventh annual regional photography exhibition.

ROTTERDAM -- Private services will be held for June Halsey Gibbs, 73, who died Tuesday at her residence.

Ms. Gibbs was born in Guilderland. She moved to Knox in 1935, and to Rotterdam in 1988. She established and operated Green Acres Mobile Home Park in East Berne from 1966 to 1988. Mrs. Gibbs was a member of the East Berne Businessman's Association and the Thompson's Lake Reformed Church in East Berne.

She was the widow of James A. Gibbs.

Survivors include a daughter, Jeanne Bascom of Albany; three grandchildren; and two great-grandchildren.

Burial will be in Knox Cemetery.

"Saptime on the Farm" was an interesting program Feb. 22 at the Knox Historical Society, held in the Knox firehouse. A large attendance enjoyed the artifacts and slides of early equipment and processes used in the making of maple syrup from the colonists to the present day. Francis Gibbs showed the slides while Marion Gibbs explained in detail the pictures. Some interesting facts were that it takes 30 to 40 gallons of sap to make one gallon of syrup; the more one drinks of the sap the thirstier one becomes; and only about 10 percent of maple trees are tapped presently in New York State, but formerly every farm had a sugar bush. Last year New York State produced more maple syrup than our neighboring state. When the temperatures are above 40 degrees in the daytime and freezing at night, it is maple syrup' time, or "sugarin' off time." A gallon of syrup has to weigh 11% lbs. Mrs. Vertie Gibbs makes the creamy maple spread at the Hillendale Farm, where all their products are sold. When' buying maple syrup, look for the word "pure" on the can. Each person received a maple lollipop. The exhibit of early Valentines was colorful with cards dated from 1905.

Brian Gibbs, son of Francis and Marion Gibbs, left Sept. 12th for Paris, France to study at American College., in Paris with a scholarship from Junior College, Albany where he is a second year student.

Guests at the Harry Gibbs home on Sunday were Francis Gibbs of Trumansburgrg and Marion Hilton of Altamont.