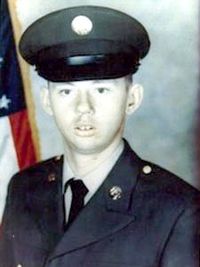 Glenn Gilbert graduated from the Berne-Knox School in 1966.

Private first class Gene (Glenn Raymond) Gilbert, son of Mrs. Warren Gilbert, was drowned in Vietnam in 1970 while attempting to secure plane-droped supplies which had fallen in the river. Caught in the undertow he was reported missing in action until the body was later found.

Service: Army of the United States

Margaret Gilbert read about the meaning of each step as the ladies carefully, lovingly, folded the flag lengthwise twice and then over and over in a triangle shape. "It chokes me up every time," Gilbert said later of the ceremony. She is becoming the president of the Gold Star Mothers of New York State, a group which she estimates number 280. She lost her son, Glenn Gilbert, in 1970 in Vietnam. "He was my only son," she said. Published in The Enterprise, Page 1, 24 Apr 1997 Issue, in the pertinent portion of an article entitled "Folding Memories into the Flag."

EAST BERNE - Services were held Monday for Warren S. Gilbert, 72, who died March 6, (1992) at his home on Beaverdam Road after a lengthy illness. He was born in Seattle, Wash., and moved to the Capital District in the 1930's. He graduated from Berne-Knox High School in 1938. He was a self-employed farmer for most of his life. Gilbert's son, Glenn, was killed in Vietnam, and Warren Gilbert was an associate member of the Gold Star Parents. He owned and raced pacing horses at the Saratoga harness track for many years. Survivors include his wife, Margaret Bradt Gilbert; a daughter, Patricia L. Rapp of East Berne; and four grandchildren, Stacey, Richard, Brian and Holly Rapp, all of East Berne. Services were Monday from the Fredendall Funeral Home, Altamont. Burial was in Prospect Hill Cemetery, Guilderland. The obituary is believed to be published in the Times Union. See the website Berne Historical Project. It was taken from the newspaper clippings of Frances Becker Miller's scrapbook.

Margaret Gilbert read about the meaning of each step as the ladies carefully, lovingly, folded the flag lengthwise twice and then over and over in a triangle shape.

"It chokes me up every time," Gilbert said later of the ceremony. She is becoming the president of the Gold Star Mothers of New York State, a group which she estimates number 280. She lost her son, Glenn Gilbert, in 1970 in Vietnam. "He was my only son," she said.

"We are a support group," Gilbert said of the gold star mothers "We understand and help each other. Asked if it is difficult to participate in ceremonies that remind a mother of her son's death, Gilbert said, "We feel that our sons are at peace."

She said it was just recently that fathers had been included, too. "I sent for associate cards for fathers in 1990," said Gilbert? "Without the fathers, there'd have been no sons."

What Is A Gold Star Mother?

Through the years this question has been asked after seeing a car in the Altamoht Memorial Day parade, the one marked "Gold Star Mothers,

Two women have ridden in the parade each year, smiling and waving to the crowds of children and adults. "Mommy, what is a Gold Star Mother? Is it a lady general?"

Questions, that people of my generation can't answer, because even we don't know.

On June 4, 1928, 25 Washington, DC., women decided that an organization should be started for mothers that have lost a son or daughter in the war. It's not really an honor to become a Gold Star Mother, because they had to give something up that they cared very deeply for. They needed to talk to each other and to find the strength to go on.

Bylaws were written and meetings started to take place, the small group soon became active in promoting patriotism arid devoted their time helping other veterans and families that also may have lost a loved one. Slowly the number of members multiplied, and similar organizations were established nationwide.

After World War II, a gold star was put in the window where the soldier may have lived, signifying that they lost their life while fighting for something they believed in—our country.

Carmen Hilton And Margaret Gilbert both had sons who lost their lives during a war. Boyd Hilton served, during World War II as a seaman second class aboard the USS Cheveliar. On Oct. 7, 1943, seven Navy Vessels were attacked and only one survived, the USS O'Bannoh. Boyd was not on that ship and never returned.

Glenn Gilbert was a private first class in the Army, stationed first in New Jersey and then in Kentucky. When the Vietnam war was heavy in artillery, Glenn was shipped over there. One day he went out to retrieve a water capsule and drowned, He probably wasn't thrilled with the idea of going in the service, but at that time the draft was still in affect and when duty called Glenn went.

These are the facts that made Carmen and Marge Gold Star Mothers. Not ah honor; but a way to cope with the nightmare they live every clay of their lives. Joining an organization of other motbers helped, but the pain is still there.

I wondered about the disparity of numbers between the farming towns where I grew up and this area where fewer young men were killed. I was shocked by the fact that, of those I looked up, one was killed in an accident, one from illness, one drowned, one from friendly fire, and only one from hostile fire. How very sad.