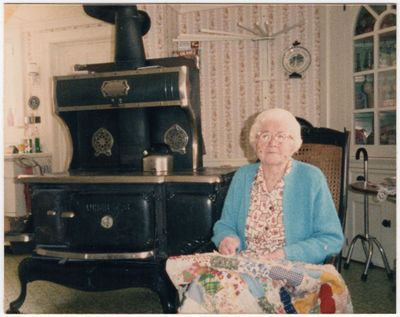 Vertie Clow was born October 1, 1893 in Knox, the daughter of Charles and Elisabeth Dennison Clow and was a lifelong resident of the town. Her siblings were:

She produced maple syrup and candy with her husband, the late Harry Gibbs, and her son, also deceased.

She started work at 14, doing housework for the Bogarduses in Knox.

Mrs. Gibbs was born Oct. 1, 1893 in Knox, the daughter of Charles and Elisabeth Dennison Clow and was a lifelong resident of the town. She produced maple syrup and candy with her husband, the late Harry Gibbs, and her son, also deceased.

She started work at 14, doing housework for the Bogarduses in Knox. Through them she met city people who came up to board. A man came and asked her and her sister to work, her daughter, Betty LaGrange, said. "Her sister said, 'They won't pay anything.' My mother said, 'I'll go.'"

The job paid $1 a week, and by the time she was married, she had saved $100. The couple used it for their honeymoon. They drove a horse down to Schenectady, and too a trolley to Amsterdam, where they stayed with friends.

The job paid off in other ways as well. Through the Bogarduses, she met people who came up to the country from New York City to vacation. In time, Mrs. LaGrange said, a New York couple built a little cabin on the Gibbs farm - just two bedrooms and a porch; they ate with the Gibbs. When the couple died, she rented the place to others. A high point was an overnight visit by the actor Gene Kelly. "I often wonder what my life would have been like if I hadn't said 'yes' about that job," Mrs. LaGrange quoted her mother as saying.

"Mother used to say the Lord didn't give her any gift," Mrs. LaGrange said. "I said her gave her the gift of hospitality. The minute someone was coming, she would start thinking what she would serve them. She was also a fine psychiatrist for people."

Mrs. Gibbs was very active in quilting and crocheting rugs. She was onae of the founders of the church's famous Election Day suppers, started 77 years ago.

She was also a member fo the Dairyman's League and the Farm Bureau.

Services will be held today (Thursday) at 2 p.m. at the Knox Reformed Church. Burial will be in Knox Cemetery. Arrangements are by the Fredendall Funeral Home in Altamont.

Memorial contributions may be made to the Knox Reformed Church, Knox, NY 12107

ALBANY Vertie Gibbs, 101, of the Teresian House, formerly of Knox, died Sunday in the home. She was born in Knox.

Survivors include a son, Alton Gibbs of Hyde Park, Dutchess County; a daughter, Betty LeGrange of Westerlo; 17 grandchildren, 38 great-grandchildren and nine great-great-grandchildren. A service will be held at 2 p.m. Thursday in the Knox Reformed Church. Burial will be in Knox Cemetery.

Contributions may be made to the church memorial fund, Knox, NY 12107. Arrangements are by the Fredendall Funeral Home, Altamont.

Stanley Clow died Sunday (September 13, 1953) in Carlisle. The funeral was held Wednesday morning, Sept. 16, from the Brunk Funeral Home in Berne. Mr. Clow was 66 years old, son of the late Charles Clow of Knox. He is survived by two sisters. Mrs. Harry Gibbs (Vertie Clow), of Knox and Mrs. George Lesperance of Schenectady, and one brother, Dewitt Clow of Albany. Rev. Roger Johnson officiated at the funeral service. Interment was in the Clow plot in Knox cemetery.

The people below are descended or related to a DIFFERENT Charles Clow!!

Mrs. Charles Clow died at her home Tuesday morning of Pleurisy after an illness of two weeks. She was a woman of Christian character and a member of the West Berne M. E. church. She is survived by her husband and two daughters, Mrs Daniel Schell and Mrs. Harrison Gage of West Berne and one son, Grant Clow of Chicago, Ill. She will be missed in her home and the family have the sympathy of the entire community.

She sat in a wicker rocking chair (a wedding gift), her hand shake was strong and sincere, she joked with family members as she spoke of her 100 years, Mrs. Agnes Schell of Star Route, top of Altamont Hill, celebrated. her 100th birthday last Monday.

Born Feb. 12, 1873, Agnes Schell was the daughter of Mr. and Mrs. Charles Clow of West Berne. She graduated from grade school, took a teacher's examination, and taught school for three years in a one-room school house. She was an organist in the West Berne Methodist church.

On October 16, 1896, she became the bride of Daniel Schell and moved to his farm. Their wedding trip consisted of traveling from West Berne to Altamont via horse and wagon, from Altamont to Albany by train and from Albany to Bridgeport, Conn., by boat. Other than her honeymoon trip, Mrs. Schell never traveled beyond Schoharie, Albany and Schenectady counties.

Although considered by her parents to be frail, she was a hard worker. As a farmer's wife, her day was long and full. She did all of her washing by hand — carried water from a well, heated it on a wood stove and washed on a scrub board. At harvest time, she would feed 18 men.

On her 100th birthday she claims 4 children, 14 grand children, 34 great grand children, and, five great-great grandchildren. On Sunday, Feb.11, an Open House birthday party was given in her honor. Some 77 plus friends and relatives signed her guest. Mayor and Mrs. William Aylward of Altamont, visited Mrs. Schell during her celebration. Mr. Rombough were instrumental Schell during her celebration

Mrs. Schell held the honor of being the oldest at her party — the youngest was nine month old Kristen Elizabeth Antlick, great grand daughter of the Howard Schells and great great granddaughter of Agnes Schell.

Also attending the birthday party was Adam Manchester of Gallupville. Mr. Manchester is the only living student , from Mrs. Scnell's teaching days.

A beautiful azalea plant, one of many floral pieces received, was a gift to Mrs. Schell from Dr. M. M. Lee of Guilderland, her family physician. Mrs. Schell and Dr. Lee's mother were girl friends. Mrs. Schell also cared for Dr. Lee when he was a youngster. Enjoying her party, Mrs. Schell commented, "I haven't seen so many friends in one place since the Fair." According to her son, Howard Schell, she has not attended the Altamont Fair in the past 60 years.

A century of good living, still enjoying each day, "Aggie" (affectionately called by her family members) sits in her wicker rocking chair, keeping her fingers busy and contributing to each. day by washing dishes and sweeping the kitchen floor.