West Mountain refers to the highlands in the southwest quadrant of the town, and is the highest point in Albany County at 2,160 ft.

The 1787 Van Rensselaer lease map shows no one living on West Mountian. West Mountain was settled starting about 1790. Within a few years there were enough settlers to organize the Baptist Church of Christ, at Rensslaerville and Berne.

One of the early settlers was Samuel Taylor born 1766 in Portsmouth, RI.[1] At Rensselaerville, on September 25, 1799, Samuel Taylor died. He was 33 and left a wife and three children one of which was born an hour after his death. On September 27th a service was conducted at the house of the widow by Truman Beeman, Elder of the Baptist Church of Christ, at Rensslaerville and Berne. [2]

The Isaac Peasley family was also among the first settlers of West Mountain. Several generations of Peasley's were born and raised there and contributed to the community. Wallace A. Peasley was born on the family farm in 1857 as well as Orson his grandfather in 1805.[3] Wallace spent his life on West Mountain and was a breeder of through bred trotting horses. He was the owner of the famous stallion, Varrick, the subject of a Currier and Ives lithograph. Wallace continued to farm atop what is now referred to as "Peasley Hill" until the 1930's. His civil commitment included serving on the town Board of Supervisors in 1896 through at least 1899.

Most of the farms on West Mountain were bought by the Resettlement Administration in the 1930's. Many farms had already been abandoned due to repeated cropping with buckwheat, barley and rye. Soil erosion was commonplace. 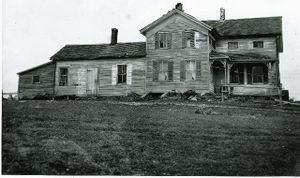 Lewis Sherman House, built say mid 19th C.; No longer standing.
From collection of Nicole Pelepzuck Cross
Much of the land, up to 80% had been deforested for farming. Federal money was used to purchase the unproductive farmland for just 2 to 4 dollars per acre. The government helped to move many of the farm families to other areas. However, several farms remained in the possession of the farmers. A few of these included the William D. Wood farm, the Crosby farm, Peasley farm, and the Sherbin farm. Katie Wood, wife of William D. was approached by the Resettlement Administration during the 1930's and asked to sell her farm, to which as history tells, she answered with a solid 'No".

In the early 1940's, the Federal government granted the NYS Conservation Department a 99 year lease for what is now much of the Partridge Run Wildlife Management Area. The sum of $1.00 was the price for the lease, with three purposes stated for the land, forestry, wildlife and recreation. Over the next 20 years the total land accumulation through the Dept. of the Interior and the Division of Lands and Forests brought the total acreage to 5,478.

In the 19th and first couple of decades of the 20th Century, West Mountain was heavily settled. Here are some easily accessible historic cemeteries within or near the boundaries of Partridge Run that folks might want to visit while they are in the vicinity: 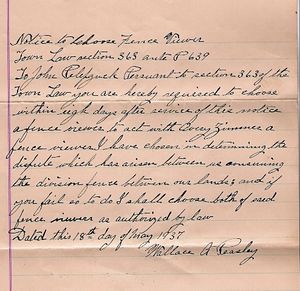 Notice to Choose Fence Viewer.
Town Law section 363 ante P 639
To John Pelepzuck Persuant to section 363 of the Town Law you are hereby required to choose within eight days after service of this notice a fence viewer to act with Avery Zimmer a fence viewer I have chosen in determining the dispute which has arisen between us concerning the division fence between our lands; and if you fail to do I shall choose both of said fence viewers as authorized by law.