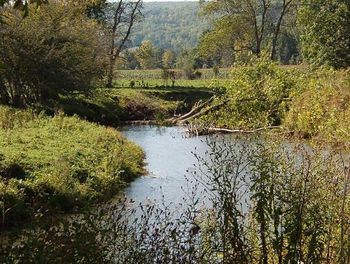 It is proposed that a Fox Creek Trail trail be developed along the bank of Fox Creek.

It could run from where The Long Path crosses Fox Creek at Helderberg Trail and Joslyn School Road intersection going west to the Berne Town Park and eventually on to West Berne. Some adjoining landowners might want to provide facilities such as trail shelters, a camping site, fire place pit, toilets.

The first phase in creating a Fox Creek Trail could begin with the section along the creek between Fox Creek Park and Berne Town Park with a connection to the nature trail behind the school. It could be used by the cross country team for practice, by kids from the hamlet walking to school, by fisherman, hikers, nature photographers. It could be a nature trail. Half the distance would follow the track of the old road from Berne to Knox which crossed Fox Creek near the Yarmchuck farm; so it would also be an historic trail.

By the way, the Yarmchuck farm may very likely be the site of the first homestead in the area. I am now thinking that it was where Peter Ball settled before 1740. The farm was on both sides of the creek and included the land behind the Lutheran Church and the school.