From Berne, NY - a Helderberg Hilltown
Hamlet of Berne
Jump to navigation Jump to search 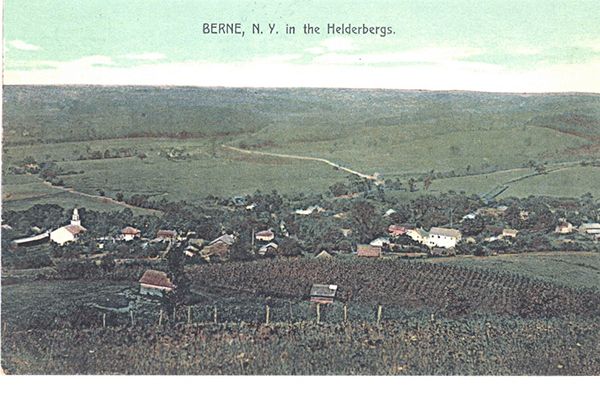 The Berne Town Hall is located here in what was once the Upper Hotel. The same building houses the Berne Public Library. Upstairs is the Berne Museum with "ten rooms of history" operated by the Berne Historical Society. The Post Office is next door.

The Berne-Knox-Westerlo Central School is at the west end of the hamlet.

Before the Post Office was located here in the latter half of the 19th century it was called "Bernville." In the 19th and first half of the 20th century it had a number of stores, up to three hotels, several blacksmith shops, a funeral home, cabinet makers, harness makers, etc.; now it almost entirely residential.

Our Heritage has a report on the 1814 Berne fire:

The hamlet of Berne is fortunate to have a great many historic homes and buildings. Click on Berne hamlet houses for a partial listing. Please add your contribution to the list.

Hotels and Taverns in the hamlet of Berne

The hamlet of Berne was once the thriving center of a prosperous farming community. Since travel from distant farms took a long time, there were numerous hotels and inns in the hamlet so the farmers could shop and stay the night before beginning the long journey home the next day.

Photos of the hamlet of Berne