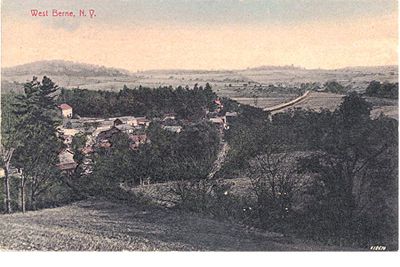 West Berne is a small hamlet in the northwest corner of the Town near the west town line with Knox and the county line with Schoharie.

One of the oldest residences of West Berne belonged to John Haverly. This house was built around 1800. This hamlet was called Mechanicsville from 1830-35 because of numerous mechanics residing there. Its later name was Peoria, named by Paul Settle, a miller who owned property in Peoria, Illinois. When the Post Office was established the village assumed the name of West Berne. Levi Ewings manufactures hats in the village around 1850. There were also many mills in West Berne along the Foxenkill in the early days. In the 19th and first half of the 20th century it had a number of stores and a couple of blacksmith shops; now it is strictly residential.