Rensselaerville - Then and Now

This page is a series of images of buildings and locations in Rensselaerville comparing and old photo with a current image of the same scene; ideally taken from the exact same spot - but then how often is life ideal? 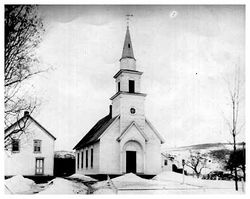 From I Spy My Hometown - Rensselaerville 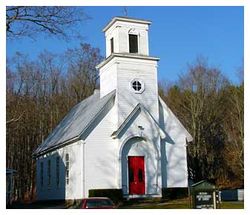 2002 by Ann Henry
From I Spy My Hometown - Rensselaerville

There is now a separate page for each town. Here links to the other town pages:

The present Rensselaerville Grist Mill, built in 1880, replaced the first mill built at this site in 1788 which was destroyed by fire in 1789. After the death of Edmund Niles Huyck in 1930, his wife Jessie Van Antwerp Huyck established the Edmund Niles Huyck Preserve in his memory. Sometime after the mill ceased operations Jessie Huyck gave it to the Preserve. In 1975 the Preserve sold the Rensselaerville Grist Mill to the Rensselaerville Historical Society for $1. The Historical Society uses the Grist Mill as a museum of the town’s early history.

The Watson House was constructed in 1809

Conkling Hall, 2318 Methodist Hill Rd., Rensselaerville, NY, was built in 1839 as a Methodist Church. It was purchased by Francis Conkling Huyck, Sr. in 1905, and converted for community use, and renamed "Conkling Hall."

Catalpa House, 5032 Delaware Turnpike, Rensselaerville, NY, was constructed in 1806 as a multi purpose structure to house a store, a ballroom, a tavern, offices, and residence for the Frisbee family. The Victorian trim, double doorway, and decorative porch were added in the 1880s. Edith Lounsbury operated it as an inn from 1922 until 1952. The Catalpa House is now a bed-and-breakfast.

The Baptist Church of Preston Hollow, 3014 SR 145, Preston Hollow, NY, was organized about 1793 but had and existence as early 1787 when the society composed of people living about Rensselaerville. It was initially called "The First Church at Rensselaerville", so named because it was the first one in the township. Churches at the time preceded villages, and like this one preceded the town, which was not separated from Watervliet until 1790. It was not until 1842 that church minutes list it under its present name of Preston Hollow

The Methodist Episcopal Church was organized in 1840. The church building was bought in 1845 and extensively remodeled in 1884 at which time the tower was added. Rensselaerville Historical Society

This school was built in 1900 to replace the original building. It remained a school until 1970.