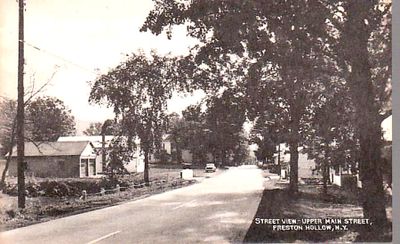 Preston Hollow is a hamlet of Rensselaerville in the southwestern part of town along the Catskill Creek in the valley of the Catskills.

Preston Hollow took its name from Dr. Samuel Preston who was the first settler emigrating from Connecticut circa 1789. For a short time in the early 1880's the town name was changed to Monclova and the post office there went by that name. After two years of being known as Monclova, the citizens there consented to change the name back to Preston Hollow. It was incorporated as a village in 1870.[1]

According to the U.S. Census, in 2000 the population of Potter Hollow and Preston Hollow combined was 374.

Early settlers of Preston Hollow included Henry Couchman who emigrated from Dutchess County circa 1793. Couchman found that where he settled and a half miles from the present village he found the nearest mill being at Leeds and the nearest apple tree in Schoharie. He later would get a bushel of apples, save the seeds, and raised an orchard which still graced his the farm in 1886.