This page is protected. If you wish to add additional information to this page contact a webmaster.

History of The Rensselaerville Grist Mill

Photo Courtesy Rensselaerville Historical Society
Before any mills were built, the first settlers in the Rensselaerville area crushed corn, buckwheat and rye grain by using crude mortars made from large logs with a cavity burned out. Feed for animals was made by grinding corn cobs with some of the corn left on.

As more settlers arrived, various mills were established to serve their needs: grist mills to grind grain to flour and for animal feed, fulling mills to process wool for clothing, and sawmills to furnish lumber for building homes, churches and stores. The mills were located alongside falls and creeks to harness water power to run the mill machinery. Because of abundant water power, settlement naturally clustered around falls and swift-flowing streams and the five hamlets comprising the Town of Rensselaerville grew.

The first mills used undershot or overshot water wheels, with the water channeled under or over the wheel and the flow of the water causing the wheel to turn. This rotary motion was transferred through a system of belts and pulleys and gears to operate the mill machinery. Later water powered turbines were used instead of mill wheels.

The first mill in the hamlet of Rensselaerville was built in 1789 by Samuel Jenkins from West Stockbridge, Mass. Zadoc Brown, then his son Harvey were the first millers. The mill was located approximately where the present Grist Mill is and was much smaller than the present mill. It had an overshot wheel about 25 feet high made out of wood. In winters ice often froze on the wheel and had to be chopped off before the wheel could turn.

The millstones were imported from France and brought from the southeast overland by oxen from the Hudson River. They were made of sections held together by an iron band. From time to time new grooves had to be cut in the faces of the stones. This was done by hand, using steel tools. Some of these tools and stones may be seen on display at the Rensselaerville Grist Mill which is open on Saturday afternoons and Wednesdays during summer months.

The mill was rebuilt in 1830 by Daniel Conkling. In 1865 the miller was D. Severson who lived in the "mill house" at the bridge (now the headquarters of the E. N. Huyck Preserve, Inc.). By 1869 the mill was owned by F. Bouton and operated by Francisco Barton. Little is known of this period of the Grist Mill’s history.

In 1879, the Grist Mill burned to the ground. The only thing that was saved was the wheel which was saved by letting more water out of the gate of the mill pond next to the "mill house". When the mill was rebuilt in 1880 by Francis C. Huyck and George L. Bouton, the overshot wheel was replaced by a turbine run by water power. Wood from the wheel was used to construct the steps to the basement and the steps at the front loading dock below the road level. The new mill is much larger than the one it replaced, but it occupies very nearly the same site as the first mill of the village.

There were nine levels of activity inside the mill. The water was led from a gate (at the left side of the bridge as you face the mill), through a cylindrical cedar flume on the creek side of the mill, down an iron raceway to the lower level of the turbine where the rushing water turned the turbine. A series of belts and pulleys and gears transferred energy from the water’s force to turning the machinery which operated the mill. 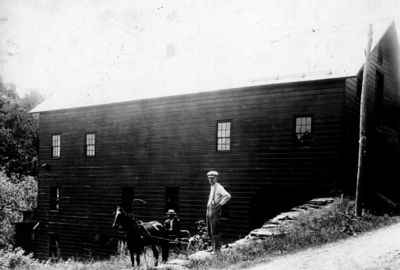 Photo Courtesy Rensselaerville Historical Society
Most of the top floor was used for storage. The lower floors had most of the complicated and expensive machinery that made up the mill workings. An office for the miller’s records was on the first floor. Customers could bring their grain to one of two loading docks, one on the street level (second floor of mill) and one below the road level (first floor of mill). Grain was then weighed on the large scales near these doors, and each customer’s information, including weight and type of the grain, was recorded.

The grain was then poured through an opening in the floor down into hoppers in the basement of the mill and from there carried to different locations in the mill by small scoops attached to conveyor belts. Two stones for grinding buckwheat separated the shuck from the kernel for buckwheat flour. A "bolter" which had a fine mesh silk screen sifted the flour to remove impurities and stray hulls. Stock feed was ground with a steel grinder and a corn cracking machine ground both corn and cob.

After the grain was reduced to flour or animal feed, it was carried again by scoops on conveyor belts to the bagging station where it was poured into grain bags to return to the farmer. When the mill was running the water level in the mill pond next to the "mill house" would drop but it would recover to its original height overnight.

On the upper level of the mill are some charred beams, remnants of a fire which happened early in December of 1897. (Date authenticated by a note in the December 1997 Altamont Enterprise column "Back in Time" which reports on the grist mill fire in Rensselaerville in its December 10, 1897, issue and says it was the first fire after the new fire company had been formed and equipped, and they saved the mill after fighting the flames for two hours.) A hose cart and hose attached to a fire hydrant were used. Lewis Becker was the fire chief. Damage to the building and machinery was about $1500. The area around the bolter on the second floor was apparently damaged the most severely, as the beams in that immediate area are much newer and uncharred -- no doubt replacements for burned ones. We are told that clouds of very fine flour were created in the area of the bolter by the sifting action of that machine, and that this "dust" is quite flammable, so it is probable that the fire started here.

The small annex extending off the right of the Grist Mill building at the first floor level (where the meeting room and Research Room are now located) was not part of the mill. It was a laundry, owned by the Huycks and operated by Mrs. Bryant and her daughter for several years during the 1970s this wing was used as a gift shop to generate funds for the Rensselaerville Historical Society.

According to mill records, during the calendar year 1886 the miller was George L. Bouton and F. C. Huyck insured the mill, the buckwheat and other grains. They were insured for $1,000 for a premium of $20. Four years later, Van Ness Huyck (a relative of F. C. Huyck’s) lived in the mill house, operated the mill, and insured it for three months for $13.60. Other millers (not necessarily in chronological order) were Daniel Miner, Mr. Borst and Reuben Baker. Mr. Baker and his family lived in the mill house; he operated the mill until he died in 1912. He was followed by Charlie Smith who was the principal miller until it closed.

In the early days, the Grist Mill operated all year round, and during buckwheat season it ran day and night. It had a reputation for the best buckwheat in the country. During the 1920s the mill season was from April to September and the work day was from 7 a.m. to 5 p.m. Although Charlie Smith was the miller, he had another day job, so Ernie Rivenburg operated it during the days when it was open. In 1933 the mill brought in $10,015.16 and expenses were $9,455.43.

Frank Huyck died in 1907 and his son Edmund Niles Huyck and Edmund’s wife, Jessie, operated the mill some years at a loss in order to provide a place for local farmers to grind their grain. The mill finally ceased regular operations on November 1, 1945, ending 156 years of mill history for the village on that spot although it ran occasionally for several years after that. A major effort was launched in 1974-1980 to restore the Grist Mill to working order and much volunteer labor went into the project. Today, though far from totally renovated, the Grist Mill can grind grain when water power is sufficient, although the wooden flume spouts large leaks. Special demonstrations were put on during the summer of 1996 and occasionally at other times when the water power was sufficient. For demonstrations, the valve at the mill dam at the bridge was opened and water flowed through the flume to turn the turbine and grind grain again. However, over time the flume has deteriorated and large leaks have prevented these demonstrations being given in recent years. Finding funds to repair the flume is a goal of the Rensselaerville Historical Society.

After the death of Edmund Niles Huyck in 1930, his wife Jessie Van Antwerp Huyck established the Edmund Niles Huyck Preserve in his memory. Sometime after the mill ceased operations Jessie Huyck gave it to the Preserve. In 1975 the Preserve sold the Rensselaerville Grist Mill to the Rensselaerville Historical Society for $1. The Historical Society uses the Grist Mill as a museum of the town’s early history and volunteers conduct free tours of the mill for visitors on Saturday afternoons and on Wednesdays during the summer season and by appointment at other times. It is closed in winter. The Historical Society also preserves a growing town archive and genealogy collection in the Louise Keppie Research Room which is housed in the one-story wing of the mill. Researchers can e-mail Historical Society members for help at any time during the year at edhase@aol.com.