From Rensselaerville, NY - a Helderberg Hilltown
Medusa
Jump to navigation Jump to search 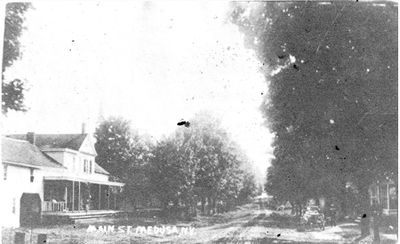 Main St. in Medusa ca. 1900, Hotel on left, ball room over shed was used for dances, meetings, justice court. photo from People Made It Happen Here

Medusa is a hamlet of Rensselaerville in the eastern part of town along the Ten Mile Creek.

Medusa was settled in 1783. The first name of the hamlet was "Hall's Mills" after its first settlers Uriah Hall and his son Joshua Hall who leased from Stephen Van Rensselaer. In 1850, the village and post office named was changed to Medusa after a postal conflict with another town being called Hall's Mills[1].