Knox - Then and Now

From Knox, NY - a Helderberg Hilltown
Knox - Then and Now
Jump to navigation Jump to search

This page is a series of images of buildings and locations in Knox comparing and old photo with a current image of the same scene; ideally taken from the exact same spot - but then how often is life ideal? 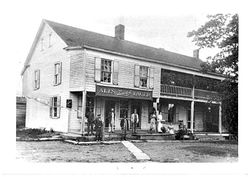 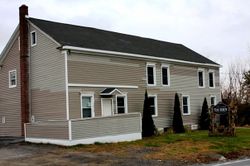 There are now separate pages for each town. Here links to the other town pages:

Helderberg Grange Hall was once a community hall above a carriage shed. In 1930 it was transformed into the Grange Hall. The old photos are from the Knox Sesquicentennial booklet. It is now empty and owned by Eric Chamberlain.

The Octagon House was built about 18?? by ??. Evidently it was once the Baptist church parsonage. The old photo is from the Knox Sesquicentennial booklet. From Eric Chamberlain: "Where my house sits was a parsonage. Inside my current foundation is the OLD foundation of dry laid field stone. Most interesting is that it is OCTAGON in shape."

Earliest hotel in Township is said to have been in existence since about 1830. The old photo dates from 1871.

Harry and Delia (Barney) Palombo had a tavern there for a long time.

It was sold twice when the second owner put a large addition on the back of the building and remodeled the bar and moved it to the west side of the building. Shortly after that it was sold a third time to Paul Centi in 2006 and opened for business in 2007 and is now a family dinner destination. What a shame that when the front of this building was last remodeled there was no attempt to restore the historical look of the building. It would have made it worth visiting to see the outside instead of just what is inside.

Knox School House 5, dating from the 1890's was recently restored by Kiwanis Club of the Helderbergs; it is the only building in Knox thus far to earn a place on national historic register.

The Knox Roller Rink was located on Knox Cave Road in front of the Knox Caves.

Lee's Church - On Knox Cave Road at Lee's Corners Said to have been either Presbyterian or Baptist denomination. Closed in the 1920's

The Methodist Church of Township was erected in 1851. It was just across the street from what was Knox School District No. 2; converted to a Knox firehouse in 1966. Collapsed under the snow load Feb. 27, 2010.

The church is a traditional country church and is over 150 years old. While there have been many renovations, the historical attributes remain.

Knox School District No. 2 started around 1866 with around 59 school aged children. The school was closed around 1932 and remained empty until Knox Volunteer Fire Department bought it and converted it in 1966.