From Knox, NY - a Helderberg Hilltown
Methodist Church of Township
Jump to navigation Jump to search 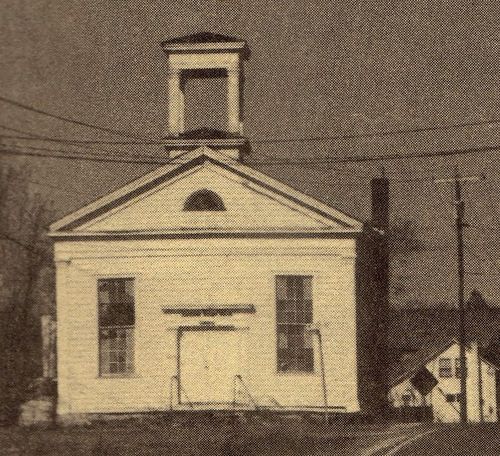 The Methodist Church of Township was erected in 1851. It is just across the street from what was school district number 2; converted to a Knox firehouse in 1966. Collapsed under the snow load Feb. 27, 2010.

KNOX — Chris Papa purchased the Township United Methodist Church in Knox about six years ago, and had thought about turning it into an art gallery. But the church, like several other buildings in the Hilltowns, collapsed under the five-day storm that covered the area with heavy snow in late February.

Now, he is reaching out to community members who remember the church at the corner of Witter Road and Route 146.

“Since I’ve been cleaning up the church after the snow destroyed the building, a lot of people have stopped by and shared memories of it,” Papa told The Enterprise Tuesday. “They’d say their mother had a funeral there, or their parents were married there, and I wondered if there are still people in the community who might remember it.”

Papa did not have insurance on the building, “but I paid quite a bit of taxes on it,” he said. It was de-commissioned as a church in the 1970s, said Papa.

He has been able to salvage hand-hewn timbers from the rubble, and is looking to sell what he can.

“I have a friend up north who says they might be interested in buying them,” Papa said.

A retired teacher, Papa purchased the building in November of 2004, and had considered a number of uses for the building, but none of them had a chance to become reality.

“I cleaned it up on the inside, and it was kind of on hold while I was doing other things,” Papa said. “This was just a freakish accident.”

Those who wish to share memories of the former church with its current owner can reach Papa at 669-2634.

To read the full story pick-up a copy of The Altamont Enterprise!