Kiwanis Club of the Helderbergs - 1965 Officers

From Knox, NY - a Helderberg Hilltown
Kiwanis Club of the Helderbergs - 1965 Officers
Jump to navigation Jump to search 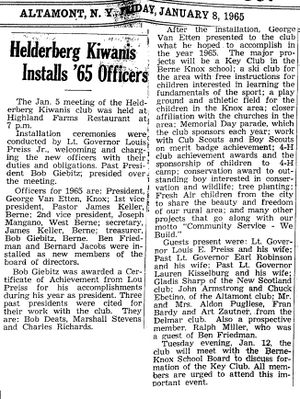 The Jan. 5 meeting of the Helderberg Kiwanis club was held at Highland Farms Restaurant at 7 p.m.

Installation ceremonies were conducted by Lt. Governor Louis Preiss Jr., welcoming and charging the new officers with their duties and obligations. Past President Bob Giebitz presided over the meeting.

Bob Giebitz was awarded a Certificate of Achievement from Lou Preiss for his accomplishments during his year as president. Three past presidents were cited for their work with the club. They are: Bob Deats, Marshall Stevens and Charles Richards.

After the installation, George Van Etten presented to the club what he hoped to accomplish in the year 1965. The major projects will be a Key Club in the Berne Knox school; a ski club for the area with free instructions for children interested in learning the fundamentals of the sport; a playground and athletic field for the children in the Knox area; closer affiliation with the churches in the area; Memorial Day parade, which the club sponsors each year; work with Cub Scouts and Boy Scouts on merit badge achievement; 4-H club achievement awards and the sponsorship of children to 4-H camp; conservation award to outstanding boy interested in conservation and wildlife; tree planting; Fresh Air children from the city to share the beauty and freedom of our rural area; and many other projects that go along with our motto "Community Service – We Build."

Tuesday evening, Jan. 12, the club will meet with the Berne-Knox School Board to discuss formation of the Key Club, All members are urged to attend this important event.