Difference between revisions of "Carnival of Blood"

From Helderberg Hilltowns of Albany County, NY
Carnival of Blood
Jump to navigation Jump to search 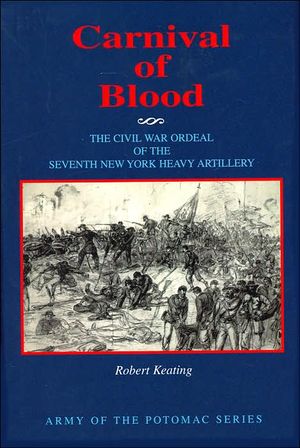 Information from this book has been graciously made available to this web site by the author and it is quoted from extensively in the biographies of the soldiers mentioned in the book and in the article on the 7th Regiment, New York Heavy Artillery.

From Barnes and Noble

The Seventh New York Artillery began its service as a garrison force in the nation's capital. In May 1864 the regiment was marched out of Washington to reinforce the Army of the Potomac, eventually joining Barlow's Division of the Second Corps. At Spotsylvania, the Seventh saw its first combat, and for the next hundred days, it encountered almost non-stop action. In those one hundred days, as it took part in Grant's Overland Campaign and in the initial phases of the siege of Petersburg, the Seventh lost an astounding 1,259 men killed, wounded, or missing. At Cold Harbor alone, the regiment suffered over 400 casualties.

This new regimental history is well-researched and detailed. The author leads the reader through the regiments bloody 1864 journey, depicting the true horrors of combat. The intriguing narrative reads more like a suspenseful novel than a regimental history. In telling this story of a gallant band of New Yorkers, the author reaffirms that the war was won through the sanguine efforts of many regiments long since forgotten by historians.

Soldier Associated with the Hilltowns