At the time of his enlistment in the Civil War, Adam was working as a laborer.[1]

Adam grew up as one of the youngest children in a large family in Knox where his father William was a farmer.[5] His father William died first in 1855 when Adam was only 13 and his mother died two years later. He assumed the duty of caring for his sister, Mary Esther, going so far as to will his back wages and property to her if he died in the war.

Adam Campbell died on February 7, 1865 while imprisoned at Salisbury, NC.[1] 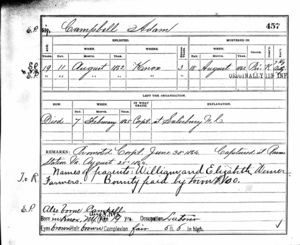