He gave his mother's name as Susan. It's possible that he forgot the given name of his mother.

Before he served in the Civil War, Henry worked as a farmer.[1]

On June 19, 1864 near Petersburg, the 7th Heavy Artillery Regiment spent the day digging a line of entrenchments about 500 yards from the Confederates.[1] During this time they were constantly fired upon by the Confederates and at some point Henry Allen was mortally wounded along with another man in the unit James Reid.[1] Henry was buried near Petersburg.[2] 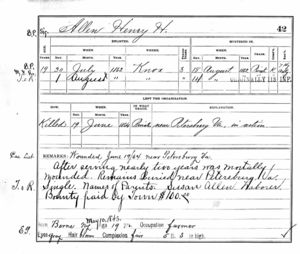 Note: His middle name was Harrison.