Charles Baxter was born in Lincolnshire, England on February 25, 1826, the son of William Baxter and Elizabeth Cumberworth. His siblings were (15 in all): 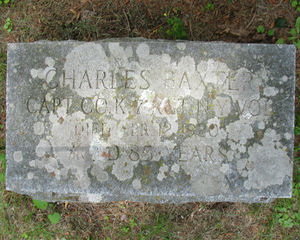 Knox
The remains of Charles Baxter were brought here for burial on Tuesday afternoon.

Knox
Mr. Charles Baxter of Delmar was a guest of his father, Mr. William Baxter on Saturday.

Delmar
Mr. Charles Baxter has returned from Knox where he has been looking after the affairs of bis mother.

OBITUARY
Death has again entered our village an taken on of the oldest and highly respected residents, Mrs. Elizabeth Crumberworth Cox, widow of the late William Baxter, in the 93rd year of her age. The deceased was born in Lincolnshire, England, in the month of November, 1813. She was twice married, coming to this country with her second husband and living in the village of Knox fifty-five years, during nearly all of which time she was an honorable and devout member of the Methodist Episcopal church. Her even and lovable disposition and many good deeds won for her many friends who have gone on before. On Thursday, Jan. 25, her life's journey ended at twelve o'clock, only to take up the pleasant heavenly journey. We know there was rejoicing in heaven for there are many dear ones there that were anxiously waiting to see the face of a sainted mother. The deceased was the mother of fifteen children of which eight survive. Henry Baxter and Charles Baxter, of Delmar; Mrs. Jane C. Allen, of West Berne; Mrs. Caroline Hungerford, of Hurstville; Joseph N. Baxter, of Arapahoe, Neb.; Elizaheth Baxter, of Knox; Walter Baxter, of Schenectady; Fred Baxter, of Sloansville, and fifteen great grandchildren. The funeral services were held on Sunday, Jan. 28, at eleven o'clock from the Knox Methodist Episcopal church, Rev. P . H. West officiating, his text being "Well DOne." Interment in the Knox cemetery.