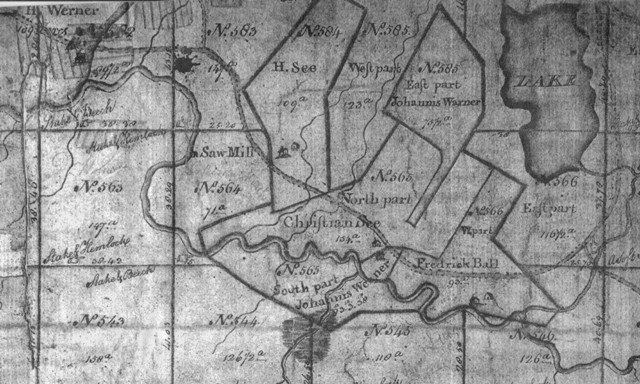 Apparently during the war years no new leases were issued. Then about 1785, when Stephen Van Rensselaer III (1764-1839) reached his majority and inherited the family rights to the Manor, it became necessary to determine the extent of these land holdings. Job Gilbert and John E. and Evert Van Alen were hired to survey and map the entire Manor.

The 1787 survey map, by Wm. Cockburn is the culmination of the survey started perhaps in 1785. Although there had been the Bleeker survey in 1766 discussed above, the 1787 survey was the first complete systematic survey of the West Manor. The result was the leasing of existing farms to the homesteaders living on them, and the preparation for issuing leases of the vacant land as a means to expand the economic base of the Manor. The resulting survey map shows roads, churches, mills, and streams, gives the lot number and name of each leaseholder, and the acreage of each lot.

Most of the leases between the patroon of Rensselaerwyck and the tenants were generated between the late 1780s and the early 1800s. The terms of the lease usually stated that the tenant and his heirs agreed to hold title to the land in perpetuity and rent payments were to be made to the patroon annually in kind or cash. The leases also state the total acreage of land conveyed to the tenant along with the delineation of the plat. Releases of property to other individuals or parties is often documented. Lands described in these leases were situated in the East Manor and the West Manor.

The Manuscripts and Special Collections unit of the New York State Library owns an extensive collection of land records covering the Rensselaerwyck Manor, an area that once included large portions of Albany and Rensselaer counties. The Rensselaerwyck Manor Papers at the NYS Library has a partial index of some of the tenants and the lots they leased. There is much more information available at the Library itself.