From Knox, NY - a Helderberg Hilltown
1787 map of Knox
Jump to navigation Jump to search

The northern half of Wm. Cockburn's 1787 survey map of the Western Manor of Van Rensselaer covers all of what are now the Towns of Berne and Knox. The southern half of the map is of Rensselaerville and Westerlo. Photostat sheets were made in the 1930s or 40s of the original map in the NYS Library Manuscripts and Special Collections Division in Albany. The digital images posted here were taken made by Harold Miller in June 2009 of the photostat copies and were manipulated in an attempt to sharpen the images.

Here is the key to the digital images of the photostat sheets of the northern half of the map that covers Knox.

Photo of 1787-88 map covering Knox in Knox Museum - Courtesy Dan Driscoll - The original map was in poor condition, so the copies of the photostats are hard to read. 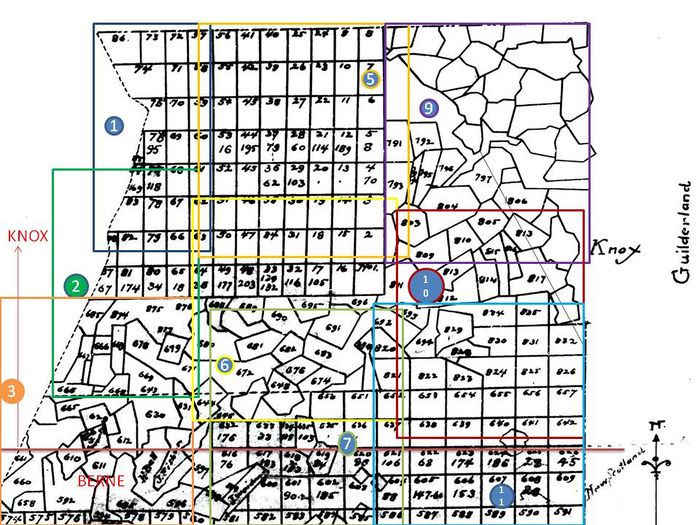 Key to northern half of 1787 map covering Knox

Note: In the rectangular great lots in the northern half of what is now Knox, the numbers used in the 1787 survey map differs from the numbers on the key. At some time after 1787 two different sets of new numbers were assigned.