Daniel Webster Quay was born in Town of Knox, Albany, NY 6 AUG 1858, the son of John Jacob Quay and Emily M. Warner. His siblings were:

Daniel Webster Quay married ABT 1879 Idella Batcher, the daughter of Theodore Batcher and Margaret Livingston. Their children were: 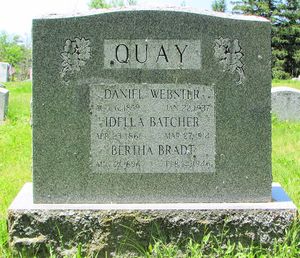 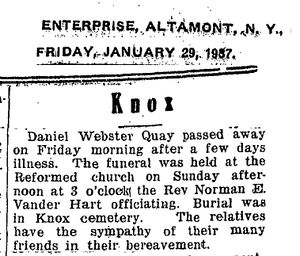 Daniel Webster Quay passed away on Friday morning after a few days illness. The funeral was held at the Reformed church on Sunday afternoon at 3 o'clock! the Rev Norman B. Vander Hart officiating. Burial was in Knox cemetery. The relatives have the sympathy of their many friends in their bereavement.

After Idella's death, Daniel married Bertha Bradt and they had seven children — Thaddeus, Helen, Donald, Robert, James, Richard, and Rosemary. It is the descendants of these 10 children who are the guests at the annual Quay reunion.