James Henry Quay was born on Tuesday, August 25, 1925 in Knox, the son of Daniel Webster Quay who married second Bertha Mae Bradt, the daughter of William J. Bradt and Nellie J. Countryman. His siblings were:

Daniel Webster Quay married ABT 1879 Idella Batcher, the daughter of Theodore Batcher and Margaret Livingston. His half- siblings were:

NOTE: Robert Quay obituary lists Bessie Dunleavy of Scotia as half sister but she was the daughter of Arthur C. Quay.

Knox - Pvt. James Quay of the U. S. Army has been spending a furlough at his home in Knox.

Knox - Pvt. James Quay of the U. S. Army has been spending a furlough at the home of his mother here. He left last Thursday for camp in Mississippi.

Mr. and Mrs. Peter Oliver of Township announce the engagement of their daughter, Helen Louise to James Quay, also of Township. No date has been set for the Wedding. 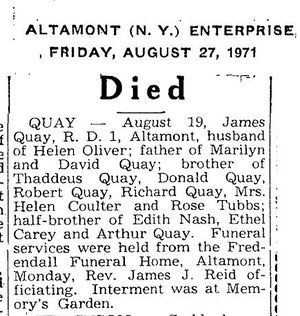 Announcement has been made of the engagement of Miss Marilyn Louise Quay and Michael John West. Miss Quay is the daughter of Mrs. James Quay of Altamont and the late Mr. Quay. Her fiance is the son of Mr. and Mrs. Fred West of Florida City, Florida.

The couple plans a May 12 wedding.