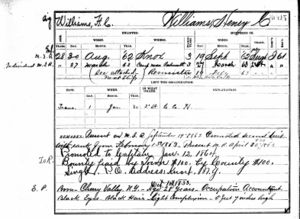 Henry Williams did not live in Albany County or specifically, Knox prior to 1880 and was not a Hilltown soldier.

Capt. Henry C. Williams returned from Gettysburg on Monday where he had been in attendance at the dedication of the New York state monument at that place.

—Capt. Henry C. Williams, of Knox, was in the village Saturday. Mr. Williams suffered a severe attack of rheumatism last fall which kept him housed all winter. While somewhat improved, ho plainly shows the effects of hls lllness.

KNOX. - Henry C. Williams has been engaged to teach the school in district No. 10.

Word has been received here of the death of Mrs. Henry C. Williams and her son, Alfred, of Schenectady, formerly of this place. The families have the sympathy of their many friends here.