They had the following children:

Before he served in the Civil War, William worked as a carpenter.[1]

The Battle of Weldon Railroad was a three day fight which ended June 24, 1864. This was the day that William Havens was shot in the right foot. The 7th HA Regiment was exposed and two fellow soldiers had to carry him to the rear. In severe pain, part of William's foot was removed by doctors. Still in severe pain with the wound failing to heal his leg was amputated on July 19, 1864 at Harewood Hospital in Washington DC. He died two days later.[1] 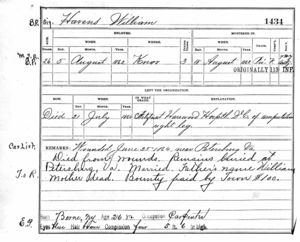