Earl J. Janssen was born in Knox Feb. 3, 1933, the son of Albert and Nina Gaige Janssen. His siblings were:

Earl J. Janssen was an auto mechanic at Vin's Exxon in Red Hook,

Earl J. Janssen was an Army veteran of the Korean War

Earl J. Janssen married on Aug. 15,1953, in Berne, former Shirley Jones, who survives at home. His children were: 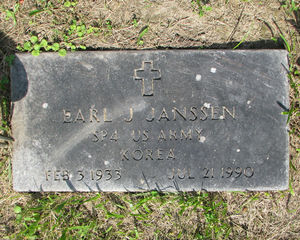 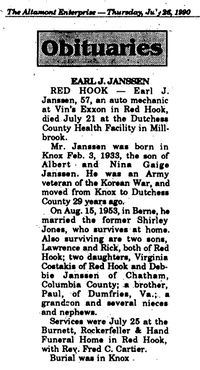 Mr. Janssen was born in Knox Feb. 3, 1933, the son of Albert and Nina Gaige Janssen. He was an Army veteran of the Korean War, and moved from Knox to Dutchess County 29 years ago. On Aug. 15,1953, in Berne, he married the former Shirley Jones, who survives at home.

Also surviving are two sons, Lawrence and Rick, both of Red Hook; two daughters, Virginia Costakis of Red Hook and Debbie Janssen of Chatham, Columbia County; a brother, Paul, of Dumfries, Va.; a grandson and several nieces, and nephews. Services were July 25 at the Burnett, Rockerfeller at Hand Funeral Home in Red Hook, with Rev. Fred C. Carder. Burial was in Knox.

Three Knox residents were injured in a one-car accident on the Knox Cave Rd. in the Town of Knox about 9 p. m. Dec. 31. Injured were Nina Janssen, Raymond Haverlv, father of the driver, Peggy Haverly. All are in St. Peter's hospital in Albany. Responding to the scene of the accident were the Albany County Sheriff's department, Altamont police and Berne Rescue Squad. The car ran off the road in heavy fog and hit a tree.

Virginia Costakis and son Chris and Debbie Janssen of Chatham and Rick Janssen of Rhinebeck joined their mother, Shirley Janssen for a family reunion Saturday at the former Nina Janssen home in Knox, now the home of Kathy and Steve Bartely. There were 40 relatives from Alaska, Kansas, Pennsylvania, Virginia and Indiana as well as New York State.