From Helderberg Hilltown Biographies
(Redirected from James A. Janssen)

Janssen, James A.
Jump to navigation Jump to search 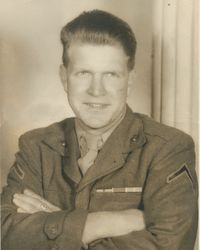 James A. Janssen was born about 1932, the son of Albert and Nina Janssen, and was raised in the farming community of Knox, New York. His siblings were:

ALTAMONT—Corporal James A. Janssen, son of Mrs. Nina Janssen of Altamont, RD. has re-enlisted. In Japan for six years in the regular army, Janssen, in the army since Nov. 1952, is a tractor scraper operator in Company B of the 532nd Amphibious Support Regiment's Engineer Shore Battalion.

Cpl. James A. Janssen, son of Mrs. Nina Janssen, Altamont, R. D., recently re-enlisted in Japan for six years in the Regular Army. Janssen, in the Army since November, 1952, is a tractor scraper operator in Company B of the 532d Amphibious Support Regiment's Engineer Shore Battalion..

James A. Janssen lived in Buelton, California, in 1973

Last Monday while James Jansen, a young son of Mr. and Mrs. Albert Jansen, was playing in the barn he fell from a beam lacerating one of his arms on a nail, which he struck as he fell. Mr. Vander Hart took James and Mr. Jansen to the hospital where it was found necessary to take some stitches in the arm. James was given a hypodermic to guard against lockjaw, so was unable to take ether.

Our sympathy goes to Mrs. Albert Jansen and children in the loss of their husband and father.

Three Knox residents were injured in a one-car accident on the Knox Cave Rd. in the Town of Knox about 9 p. m. Dec. 31. Injured were Nina Janssen, Raymond Haverlv, father of the driver, Peggy Haverly. All are in St. Peter's hospital in Albany. Responding to the scene of the accident were the Albany County Sheriff's department, Altamont police and Berne Rescue Squad. The car ran off the road in heavy fog and hit a tree.