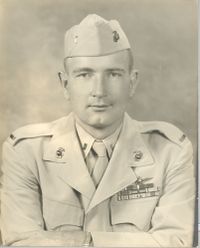 Paul Gaige Janssen was born Wednesday July 28, 1926, the son of Albert and Nina Janssen, and was raised in the farming community of Knox, New York. His siblings were:

Paul G. Janssen volunteered to serve in US Marine Corps. He reported to Paris Island in August 1943. From boot camp, he was assigned to 3rd Marine division and sent to Camp Pendleton, CA. The 3rd Marine Division invaded Bougainville, part of the Solomon Islands on Nov. 2nd , 1943. While there he eventually contract malaria and left the island in Jan. 1944.

In April 1945, he was part of a Communications Unit of the 6th Marine Division was on the second wave invading Okonawa. After seven weeks of combat, Paul was severely bruned over 67% of his body in a rear area accident. He would spent over 10 months in the Philadelphia Naval Hospital Burn Unit recovering.

Paul entered naval flight School at Pensacola, FL. at the beginning of the Koren Conflict. He earned his wings in October 1951, became a 2nd Lietenant and deployed to Korea for a year long tour. He flew 117 missions as an F9F Panther pilot with the VMF 311 “Tomcats” based in Pohang, Korea under Marine Air Group 33. Paul Janssen was awarded the Distinguished Flying Cross for his actions on a mission in Korea in 1953. He was also awarded his second Purple Heart.

In 1968, Paul promoted to Lieutenant Colonel, take Command of the VMA-324 Squadron in Beaufort, South Carolina. The “Devil-Dogs” were part of MAG 15. He deploys with the Squadron to Da Nag, Vietnam where he flies 50 missions, including multiple missions attacking the Ho-Chi Min trail after the Tet Offensive.

In 1972, Paul was promoted to Colonel, and took connand of MAG-12. In may 1972, MAG-12 deployed to Vietnam and conducted combat operations from Bien Hoa Air Base, near Saigon, until finally withdrawing from the war on 29 January 1973. MAG 12 was the American combat aviation unit in Vietnam. Under Paul's Command, MAG 12 returned to MCAS Iwakuni, Japan where it remainds stationed today. United States Navy Fighter Weapons School

Because of his externsive experience and expertise with the F8F Crusader, after returning from his 1st. Vietnam tour, in the fall of 1969, his is nominated to atten the 3rd class of the first year of the “Top Gun” Program at Miramar. He was 43 years old. The next youngest pilot in this class was 28. “Gramps” as the younger pilots called him, would finish 3rd in the class of 20.

Beginning in the Mid 1960s, Paul Janssen attended numerous training courses on chemical, bio-toxic, and nuclear warfare. Form early 1970 until his return to Vietnam in 1972, he was assigned the duty at the Defense Nuclear Agency at the Pentagon. Other than his transfer record to report for this duty, due to the classified nature of his assignment at the time, no records of his specific duties were retained.

Finally, in August of 1975, after over 31 years of service, Paul retired from the Marine Corps at Quantico.

Serving over thirty-one years in the United State Marine Corp, Paul Gaige Janssen was a decorated World War II, Korean, and Vietnam Veteran. He retired in 1975 as a Full Colonel, and then embarked on a twenty-four year career as a Corporate Learjet Pilot for numerous firms.. Paul Janssen lived in Berlin, Md. in 1984

Paul Gaige Janssen, 86, of Palmyra, Pennsylvania, passed on to God's Kingdom on February 18, 2013, at the Lebanon Valley Brethren Home in Palmyra. A son of Albert and Nina Janssen, he was born in 1926 and raised in the farming community of Knox, New York. Serving over thirty-one years in the United State Marine Corp, he was a decorated World War II, Korean, and Vietnam Veteran. He retired in 1975 as a Full Colonel, and then embarked on a twenty-four year career as a Corporate Learjet Pilot for numerous firms. He is survived by his wife, the former Navy Wave Jean Claire Sacks, of Hellertown, PA. They were married over 61 years. They have three children: daughter Thalia Jeanne Hagerup and her husband Jack, of Dranesville, VA, son Paul Gaige Janssen Jr and his wife Cheryl, of Doylestown, PA, and David Gaige Janssen and his wife Lisa, of Hershey, PA. Paul has 9 grandchildren and 2 Great-Grandchildren and a third on the way. They all adored and loved their Grandpa.

Paul proudly served his country as an infantry Marine on the islands of Bougainville and Okinawa in World War II and was wounded in both campaigns. He entered Navy flight school in Pensacola, FL when the Korean Conflict began and served one extended tour of duty, flying 117missions and was awarded the Distinguished Flying117missions and was awarded the Distinguished Flying Cross. He served two tours in Vietnam, the last in 1973-1974 in Command of Marine Air Group 12 at Iwakuni, Japan. His Christian faith and church service were as important to him as his service to his country. A life-long Lutheran, he served many roles in numerous churches throughout his post Marine life. Above all, he enjoyed providing for and spending time with his family; and his family will love him forever. Guest visitation will be held on Friday, February 22, 2013, from 5PM to 6PM at Buse Funeral Home, 145 North Grant Street, Palmyra, PA 17078 (717) 838-7034. A brief memorial service will follow. Interment at Arlington National Cemetery will follow at a later date. The family asks that any donations be made to the Wounded Warrior project at www.woun

Upon completion of the course he will report: to Marine Corps Air Station, Cherry Point, N. C, for duty. The Navy's All Weather Flight School is designed for advanced training of Navy, Marine and Coast Guard pilots in instrument flight. The course includes instruction and practice on such things as radio range orientation and approaches, direction finding, instrument letdown systems, radar ground controlled approaches, and the latest in aids to air navigation, the omnidirectional range.

During the period of instruction the student receives much ground work to prepare him for his actual in-flight practice. ...Also, he learns much about the art of passing this instrument knowledge on' to other aviators.