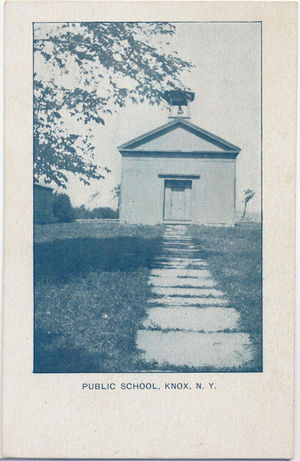 Knox one room school house No. 6 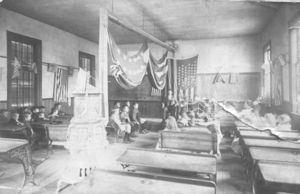 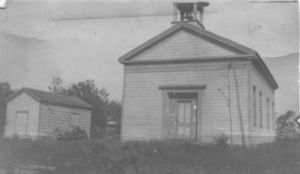 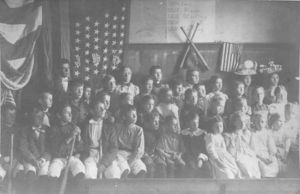 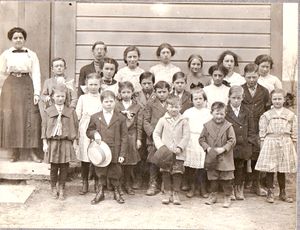 School term 1912-1913 Vertie Bassler was the teacher.Susan Pramer back row second from the left

The schoolhouse of District No. 6 is located in the center of the village of Knox, and has been the property of the Knox Volunteer Fire Company since 1950. Some of the teachers of the district, as reported by Myrtle and Lena Quay, Edna and Elizabeth Stevens, Vertie Gibbs, and Ada Lesperance were: William Haverly, Elmer Saddlemire. John Bogardus, Anna Hunting Wheeler, Rev. Edward Kelder, Myron Filkins, Myron Shaver, Rev. A. H. Weaver, James Adams, James Durfee, Adelaide Dyer, Vertie Bassler, Edward Gaige, Edward Mattice, Milton Quay, Dorothy Kingsley Norman, and Myrtle Fairlee Weidman.

Blanche Stevens Rendo recalls that when the teacher went outside at noon, the girls danced around up on the platform but the boys were too shy to join the frolic. The teacher, Milton Quay, would sometimes watch them and urge them to keep it up. She also remembers that Bryon Adam's father, John, brought freight from Altamont with horses, and in the winter when he came through the village with his big, straight sleigh just as school was letting out, all the children would hitch a ride.

Arbor Day is remembered by nearly all the senior citizens of Knox. On Arbor Day, the children planted trees and generally cleaned up the grounds. Now, once again, this practice has been reinstated in the observance of Earth Day. Many of the former pupils of the district also remember that they used to cross the road to an orchard and get the most delicious apples they'd ever eaten.

Mabel Chesbro Ogsbury recalls a play entitled "The Mother Goose Drill", which enjoyed great success. She also remembers a near-disastrous incident that took place when Myron Shaver was the teacher. The entire class went outside one day right after the stove had been filled with wood, and in the confusion of the exit, somebody forgot to close the damper in the pipe. Later, somebody went back into the building and found that the stove had grown so hot that all the adjacent desks were scorched.

In 1931, District 6 had been centralized in the Berne-Knox system, but the new school was not prepared to accept students until September, 1933. In the interim, some children were brought into the district from other areas in a bus driven by Norman Van Wormer. In the final year of District 6, a Christmas play was presented under the direction of the teacher, Dorothy Kingsley Norman. At the term's end, a picnic was held at White Sulphur Springs in Berne. The last students to attend the District 6 school were: Lloyd Taber. Elmer and Niles Becker, Eleanor Quay, George and Lillie Mae Saddlemire, Alice, Mae, Irene, and John James, Thaddeus, Helen, Donald, and Robert Quay, Hilda, Norma, Bernard and Ivan Settle, Paul Janssen, Pauline Jones, Austin Saddlemire, Frank and Barbara Lannert, Virginia Stevens, and Merlin Dexter.

NOTE: In May 1950, the one room school house of School District No. 6 was purchased by the Knox Volunteer Fire Department for one dollar. Remodeling labor was done by members of the department, and funds came from loans made by private citizens who waived any interest charges. 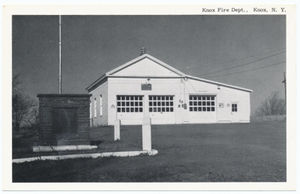 The one room school house No. 6 after remodeling and enlarging to serve the Knox Volunteer Fire Department
.