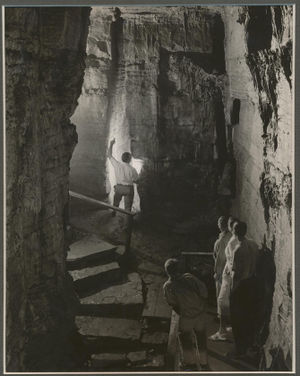 Knox Cave is located near Knox in Albany County, N. Y. It is one of the largest caverns in New York State with many high passages and other natural beauties. It was used in Dutch Colonial times as a refuge by Indian war parties. It was open commercially from 1933 to 1958. D. C. Robinson ran the operation most of this time. It is now owned by the Northeastern Cave Conservancy and a permit is required to visit it. The cave is closed when bats are hibernating to protect them. The cave has features that fascinate experienced cavers, but Knox Cave is extremely dangerous for inexperienced "adventurers."