Knox: Pillbox capital of the world

From Knox, NY - a Helderberg Hilltown
Knox: Pillbox capital of the world
Jump to navigation Jump to search 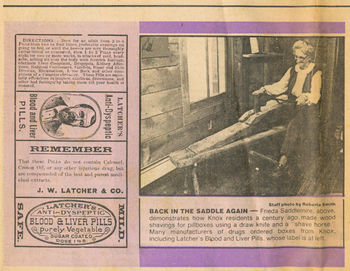 The pillbox capital - Historian aims to put Knox on map

Frieda Saddlemire wants to put Town of Knox on the map. Not just the Albany County map, the world map.

She wants school children in Eketahuna, New Zealand, fishermen in Mallaig, Scotland and millet growers in Lawra, Upper Volta, to know that "Knox, Albany Co., State of New York" is the answer to the question, "What is the pillbox capital of the world?" That's right, the world.

But small steps first: For the time being, Frieda Saddlemire will let the rest of the world languish in ignorance about her home town and will settle for a sign along Route 156 through Knox telling passersby that they are entering or leaving the global center of the 19th century, basswood pillbox industry. The undisputed global center.

Saddlemire is the Town of Knox historian and spends as much time telling people about Knox and its pillboxes as people want to spend listening. She'll unlock the town's museum for visitors who want to see some of the equipment used by Knox's early residents during most of the 19th century to make pillboxes by the millions for pharmaceutical companies. Knox pillboxes wound up in pockets, handbags and medicine cupboards throughout the United States and Europe.

The Knox Historical Society Museum houses some interesting tools used in the manufacturing process: knives for shaving basswood into thin strips; double-boiler-type, cast-iron pots for melting shavings from horses' hooves, supplied by the two blacksmith shops in town, into glue; and wooden forms known as "grippes" used for holding parts of the pillboxes in place until the glue dried.

Mrs. Saddlemire can also point out the only remaining pillbox factory still standing in Knox. It's behind the baseball field across the road and up a piece from Frieda Saddlemire's house. The building is used as a storage shed by the people who own it.

Who labeled Knox the world's pillbox capital? "We just did it," says Frieda Saddlemire, referring to herself and the rest of the residents who organized the town's sesquicentennial celebration in 1972. "We tried to find other places that had made pillboxes but no where did we find a place that made anything like the pillboxes made in Knox. So we decided to call Knox the capital. When you think about it, we were really kind of brave to say that."

No one ever disputed the claim, Saddlemire says.

Frieda Saddlemire had heard about Knox's pillboxes all her life while growing up in nearby Gallupville and when she moved to Knox in the 1940s after getting married, she remembers her mother-in-law giving her a pillbox. Then she started to learn their history.

Nathan Crary started the pillbox industry In Knox in 1806. He is also credited with having invented the pillbox. Crary was born in Groton, Conn., and came to Knox when he was a child. Frieda Saddlemire says she is not certain why Crary started making pillbox but it might have been because basswood grew in abundance in the surrounding Helderberg Mountain forests. Or, "some people know how to capitalize on an idea," Saddlemire says. "And pillboxes was an idea whose time had come."

Entire families of Knox residents like the Crarys, Quays and Champions worked at making pillboxes. It started as a cottage industry and expanded into small shops and factories built adjacent to homes. At one time, Saddlemire says, there were six factories turning out pillboxes in Knox. The pillboxes were made from thin strips, or shavings, of basswood, a good wood to use because it doesn't split. Long, thin strips formed the sides of the boxes. The tops and bottoms where cut or stamped out in the factories and given to the town's women to assemble in their homes. A gluepot full of molten horse hoof clippings was a common sight on the back of a stove.

One person could make 1,600 to 1,800 pillboxes in a day. The workers were paid a few cents for 400 boxes. "When you think about the little bit of money they made for all the work involved, you can't believe it," Saddlemire says.

The industry came to an end when the forests were depleted of basswood trees and when inventors discovered how to make machines to manufacture glass and tin pill containers. The industry began to decline in the early 1900s and was finished by 1920.

Pillbox making returned to the town briefly in 1972 when townsfolk decided to learn to make pillboxes to sell for 50 cents each during the town's 150th anniversary celebration. Anniversary committee members also had bumper stickers printed proclaiming the world status of their town and sold ornamental plates decorated with basswood tree leafs and a drawing of a pillbox factory.

Saddlemire says Arthur Quay, whose ancestors were original pillbox makers, taught her to make pillboxes. She, in turn, held classes to show others how to make them. "We did it because we think it's an art that shouldn't be lost," Saddlemire says. The committee made 3,000 pillboxes in 1972.

"But we didn't use shavings from horses hooves to make the glue," Frieda Saddlemire confesses. "We used Elmer's Glue."

Maybe next year, for Albany County's tricentennial celebration, the Town of Knox will get its roadside sign proclaiming it pillbox capital of the world, Saddlemire says.

The Pill Box Industry, located exclusively in Knox, was founded by Nathan Crary in 1806. It flourished for over 100 years under the direction of the town's six factories.

The primary component of this industry was basswood of excellent quality. Basswood trees were cut by hand in the early part of the century. They were sawed into blocks and split into pieces that were dried and planed. The resultant shavings were used to make the pill boxes.

Women and children helped assemble the boxes. This required four operations for which they received from 3¢ to 7¢per hundred. A man could earn $1.00 a day by cutting out 24,000 tops and bottoms.

The finished boxes were packed in "Tierces" of approximately 10,000 boxes. These were taken by wagon to Resselaer and shipped down the Hudson River. Manufacturers of patent medicines used Knox's pill boxes for world-wide distribution of their products.

Shortage of basswood trees and the introduction of glass vials and tin boxes, tolled the death knell of the pill box industry. 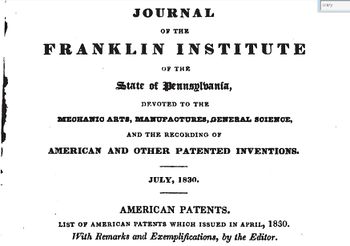 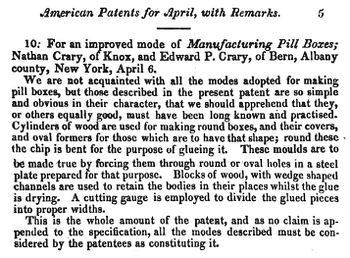 JOURNAL OF THE FRANKLIN INSTITUTE OF THE State of Pennsylvania
DEVOTED TO THE MECHANIC ARTS, MANUFACTURES, GENERAL SCIENCE, AND THE RECORDING OF AMERICAN AND OTHER PATENTED INVENTIONS.
JULY, 1830.
AMERICAN PATENTS.
LIST OF AMERICAN PATENTS WHICH ISSUED IN APRIL, 1830.

We are not acquainted with all the modes adopted for making pill boxes, but those described in the present patent are so simple and obvious in their character, that we should apprehend that they, or others equally good, must have been long known and practised.

Cylinders of wood are used for making round boxes, and their covers, and oval formers for those which are to have that shape; round these the chip is bent for the purpose of glueing it. These moulds are to be made true by forcing them through round or oval holes in a steel plate prepared for that purpose. Blocks of wood, with edge shaped channels are used to retain the bodies in their places whilst the glue is drying. A cutting gauge is employed to divide the glued pieces into proper widths.

This is the whole amount of the patent, and as no claim is appended to the specification, all the modes described must be considered by the patentees as constituting it.[1]
Title: Journal of the Franklin Institute
Contributor: Franklin Institute (Philadelphia, Pa.)
Published: 1830