From the Knox Sesquicentennial Booklet (1972)

The History of Albany County by Tenney and Howell cite that sawmills were in operation before 1825 at various points along the small streams. In Bozenkill the Duane sawmill is said to have been in operation as long ago as 1795. Part of the foundation is clearly visible today.

Amos Crary, Hiriam Gage, Egbert Schoonmaker and Nathanial Swan are listed as operating mills before 1825. Swart and Saddlemire, Frederick Bassler and Bemsley Williamson were operating sawmills in the 1889's. Bassler's sawmill was located on the present Hillendale farm and its foundation can still be seen.

Mr. Sturgess, town historian affirms that a sawmill built by Swan and Sturgess in the 1830's at Sturgess' Hollow sawed pine lumber night and day when the water was high enough. Another sawmill on the property of Sue Pond probably operated by Chesebro or Keenholts sawed hardwood. Both of these foundations are still in evidence today. The grist mill where farmers brought their hand flailed grain was located down in the hollow near the present home of Mr..and Mrs. Raymond Haverly.

According to Tenney and Howell, Alexander Crounse "erected a tannery on the main road through Knoxville and for many years did a large business in the manufacture of harness and leather goods."

Emmett Willard reminiscing in a letter to the editor in an 1898 issue of the Enterprise, states that "Alex Crounses' tannery located in the hollow brings both the smell of the tannery and all the wonders of the old mill." Tenney and Howell record that the changes in the hide and leather trade had made it a less profitable business but Earl Sturgess, town historian states that when Johnstown began the manufacture of leather it could be done much cheaper and subsequently Knox's tanning operation dwindled.

Eugene G. A. Crounse, son of Alex Crounse, established improved machinery for the manufacture of horse feed and ran both the tannery and the grist mill. Evidently the old tannery wound up as a grist mill. It is reported that the grist mill burned down in 1896 and again Knox farmers had to take their feed to the surrounding towns. Gideon Taber was also a tanner and harness manufacturer and also made shoes. He went to Canada during the Revolution because of his Quaker beliefs. When he returned he became an itinerant shoemaker. He prospered so well that he established a small tannery where he made leather and manufactured shoes, saddles, and harnesses employing quite a number of men. This work was done on the Taber homestead. Mr. Gideon Taber was the great, great, grandfather of the late Stanton Clute. This old homestead is now the home of Mr. and Mrs. Rowe and Mr. and Mrs. Eberle. The old shed behind their house was once the "old homestead" referred to by Tenney and Howell, Mrs. Helen Clute relates.

The blacksmiths were located right in the village. One was located on the present site of the Stevens Gas Station, and the other was located at the present home of Mrs. Pauline Quay. 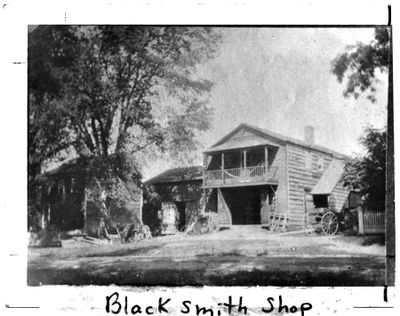 Prentice Williams, father of Elam Williams, learned the cabinet makers trade and also did the undertaking business in the village of Knox in the early 1800's.

Past historians note that Knox had no waterpower of importance. Consequently agriculture was the biggest industry. Among one of the products was hops.

Earl Sturgess states that in "back of Charles Beebe's place there was once the largest hop farm in Albany County". Another was the "old Lendrum Place" in the Bozenkill Hollow, now the Altamont Rod and Gun Club. The 1866 Map of the Town of Knox shows a hop house.

Hop growing required planning and work. Hop yards were laid out 7 feet apart each way and carefully cultivated. Special plows, cultivators and harrows were needed to keep the plants free of weeds. Men grubbed the hops in spring and women tied them to poles early in the summer. Harvesting was begun in August and continued until the frost. New plants were started from the runners of roots similar to the way strawberry plants are planted. Only the flower was picked as there could be no Leaves. Hop kilns or hop houses had steep roofs and a ventilator which turned with the wind as the hops had to be kept dry.

Men report that the hop picking day begun at 7 a.m. and ended at dusk.

Hops were picked, dried and baled here and it is presumed they were brought by wagon loads to breweries in Albany. "The Altamont Enterprise cites in 1887 that the major yards belonging to George and Joseph Haverly yielded over 900 boxes of hops. Boxes were 3 feet by 9 feet and 24 inches deep and were partitioned to make four boxes. Pickers usually get one of these large boxes and then filled the four, for which they were paid $.50 per box. Many of Knox's senior citizens recall the fun of the hop picking bees.

The Enterprise published these new items from Knox, September 5, 1885: "We will undoubtedly be well represented at the social hop jigs as many of our citizens excel in tripping the light fantastic toe". 1n 1886: "Villagers who have been away hop picking are returning laden with shekels and a determination never to go hop picking again." Another early industry was the manufacture of butter and cheese. Tenney and Howell provide the information that a cheese factory was built about 1/4 mile from Berne in 1878, but an 1886 issue of the Enterprise states that, "The Berne and Knox cheese factory have incorporated their organizations and are prepared to do business in a legal manner. The building was said to be 72 by 26 feet and had two floors. The lower floor contained five horsepower boiler that heated the milk vats. Four hundred and ninety-five pounds of cheese were made in a day."

Nearly every homestead in the earlier 1800's made their own butter and cheese. Many times it was used to buy other staples at the stores.

The wool and flax raised were also used by the pioneers for the spinning and weaving of cloth. Much of the grain raised was used to make flour and meal and again used to buy other items.

The Town of Knox in 1972 cannot begin to boast of such an impressive harvest. There are very few farms producing these products still in existence. Most of the citizens of Knox have employment in the Tri-city area or are employed locally.

Gibb's Hillendale Farm is one of the old farms, but at present they are producers of maple syrup and have a camping area in the summer. Legend states that an Indian chief always camped at the Gibbs site because of the never ending supply of excellent spring water available.

The Gage Stock Farm, in the days before and during the Civil War was used as underground railway because of its proximity to the railroad station in the Bozenkill, is no longer engaged in cattle raising.